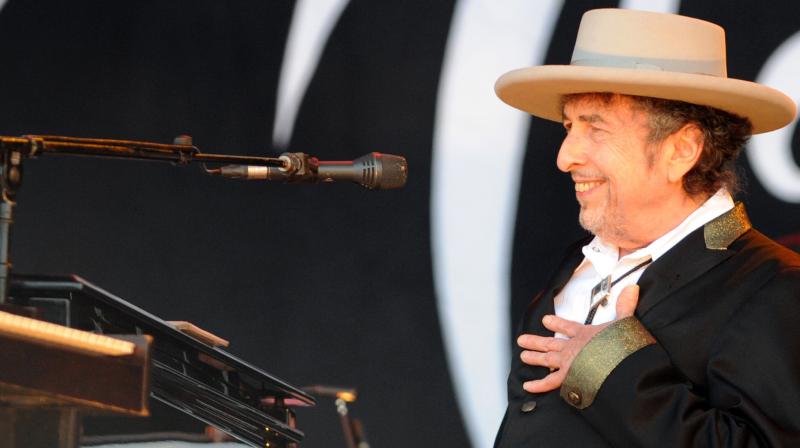 He also expressed his huge surprise at receiving the award (Photo: AFP)

Stockholm: Nobel laureate Bob Dylan sent a message on Saturday thanking the Swedish academy for awarding him the Nobel prize for literature, an honor the American singer and songwriter believed was about as likely as "standing on the moon."

"I'm sorry I can't be with you in person, but please know that I am most definitely with you in spirit and honored to be receiving such a prestigious prize," Dylan said in a speech read by Azita Raji, the U.S. ambassador to Sweden, at the Nobel banquet.

He also expressed his huge surprise at receiving the award. "If someone had ever told me that I had the slightest chance of winning the Nobel Prize, I would have to think that I'd have about the same odds as standing on the moon," he said.

The media-shy Dylan finally accepted the 8 million Swedish crown ($870,000) prize for literature, after frustrating the award-giving academy with weeks of silence following the announcement of the award on Oct. 13. But he chose not to attend the festivities.

His absence has been widely debated in Sweden in recent weeks, where the Nobel prize is a huge source of pride. One member of the academy accused Dylan of being "arrogant" and "rude" as the singer remained silent after the award was announced.

In his place singer Patti Smith performed Dylan's "A Hard Rain's A-Gonna Fall" at the award ceremony earlier in the day. A nervous Smith forgot the lyrics and had to start over but still received emphatic applause at the end.

While Dylan was absent, all other laureates, which include Japan's Yoshinori Ohsumi for medicine and Britain's Duncan Haldane for physics, accepted a medal and a diploma from the hand of the Swedish King Carl XVI Gustaf before attending the banquet at Stockholm's City Hall for about 1,300 people.

In a Nordic country priding itself on its modernity, the Nobel banquet is vestige of old-world luxury that every year brings together royalty and the powerful in politics and business with some of the world's top scientific minds. The dress code is white tie and tails for men and gowns for women.

The prize was introduced in 1901 according to the will of Alfred Nobel, a Swedish inventor and industrialist, five years after his death in 1896.

The prizes in Physics, Chemistry, Physiology or Medicine, literature and economic science are awarded in Stockholm, Sweden, while the Nobel Peace Prize is awarded in Oslo, Norway.