After 'Baahubali' Prabhas, 'Katappa' Sathyaraj to get wax figure at Madame Tussauds

Veteran actor Sathyaraj, who played the popular character, is all set for an honour previously accorded to Prabhas. 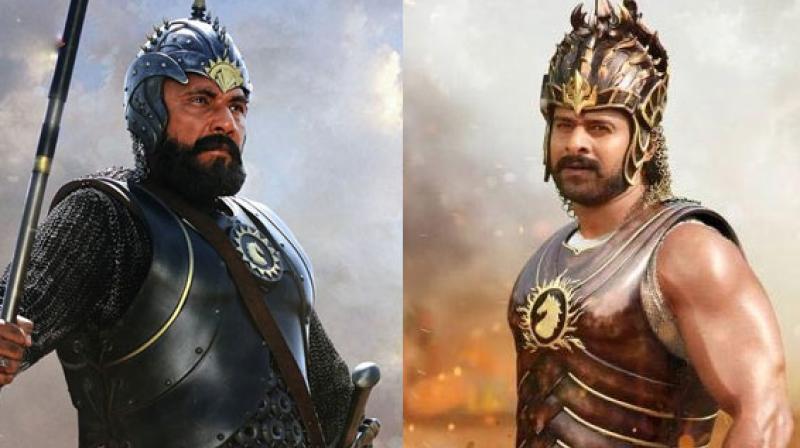 Sathyaraj as Katappa and Prabhas as Baahubali in the 'Baahubali' franchise.

Mumbai: Katappa was one of the most pivotal characters in the ‘Baahubali’ franchise, and was undoubtedly the second most popular character, more than Devasena, Bhallaladeva, Sivagami and Avathika, played by the ‘stars’.

“Why did Katappa kill Baahubali?’ was a perennial question dominating social media, with meme-makers going on an overdrive for almost two years before the second installment hit the theatres in April 2017.

The question perhaps drew crowds to the theatres for 'Baahubali: The Conclusion', making it earn more than Rs 1000 crores worldwide.

We now know why Katappa killed Baahubali, but the former’s popularity is intact and will be capitalised at the popular wax museum Madame Tussauds.

Veteran actor Sathyaraj’s wax figure as the popular character will be unveiled at the museum in London.

While ‘Baahubali’ was in Telugu language, the actor is primarily known for his work in Tamil cinema and has become the first Tamil actor to get this honour.

His son Sibi Sathyaraj announced the news on Twitter and actors like Khushbu Sundar, Prasanna, Ramya Nambessan were among those who expressed their delight at the news.

Yipppeeee...so proud to read this..gives me one more reason to visit my fave destination often..many congratulations to a man of little wants and the coolest man I have ever seen..#Satyaraj Sir 👏👏👏👏👏💐💐💐💐💐👍👍👍👍 @Sibi_Sathyaraj https://t.co/LmryvbVeId

Ahw whatta tribute machi. So proud of him. My regards to him

Incidentally, Prabhas’ wax statue has also been unveiled at the museum last year.

Forget Mahishmati, the two are now a part of the same ‘kingdom’, though unfortunately at two separate locations as Prabhas' wax figure is at Bangkok.

Be it its song getting performed at the NBA, or the magnum opus getting recognised by websites like Rotten Tomatoes, 'Baahubali' has once again showcased its worldwide appeal.