A day after joining more than 80 women protest at Cannes, the actress said that change for women in Hollywood already is happening. 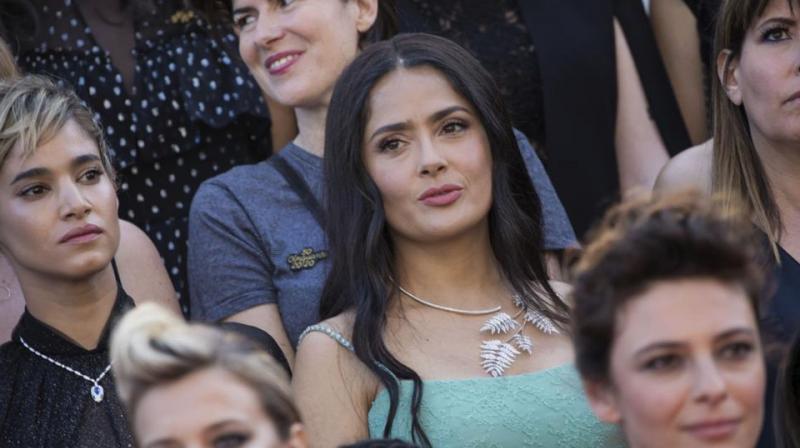 Salma Hayek during her recent protest at Cannes. (Photo: AP)

Cannes:  A day after joining more than 80 women protest at the Cannes Film Festival, Salma Hayek said Sunday that change for women in Hollywood already is happening.

In a conversation that was part of the 'Women in Motion' talk series at Cannes, Hayek said her production company is having trouble keeping up with the demand for female writers and directors. The actress-producer said she has sold four TV shows about women this year.

Hayek said much work still needs to be done, particularly on the issue of equal pay. The 51-year-old actress said she hasn't been insisting on equal pay yet because male stars and producers still need to adjust.

But she repeatedly spoke positively about progress behind the camera.

"Maybe you don't see the difference in the numbers, but it just happened this year," Hayek said. "It worked. And I think we should enjoy it."

Hayek also remarked on her allegation of sexual harassment against movie mogul Harvey Weinstein in an op-ed in December. Weinstein at the time issued a lengthy statement of denial. Hayek said Weinstein specifically contested her claim and that of Lupita Nyong'o because they're women of color.

"It was a strategy by the lawyers, because we are the easiest to get discredited," Hayek said. "It is a well-known fact, if you are a woman of color, people believe what you say less. So he went attacking the two women of color, in hopes that if he could discredit us, he could then maybe discredit the rest."

In the wake of the scandals that have followed Weinstein's downfall, Hayek said men in Hollywood "are terrified" and that "predators are hiding." But she said the #MeToo movement also is a great time for men "to rethink what it means to be a man."