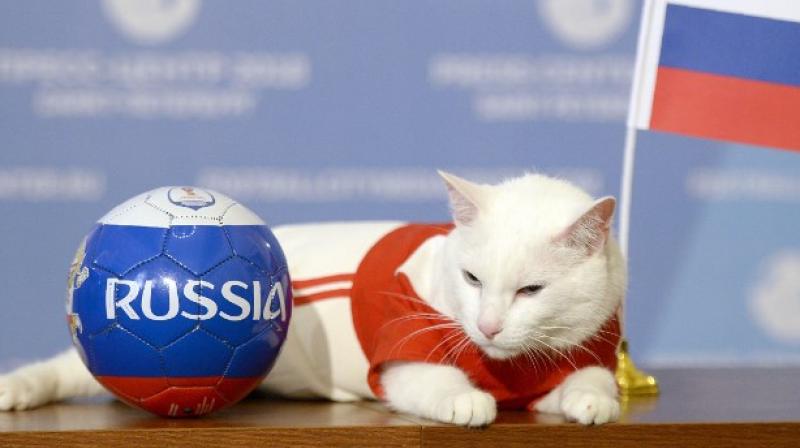 Achille the cat, one of the State Hermitage Museum mice hunters, poses for a photo with Russia national flag during a ceremony in Saint Petersburg. (Photo: AFP)

Moscow: Russia's football team has failed to chalk up a single victory in eight months but things could be about to improve -- according to a supposedly clairvoyant cat who predicted a win for the side in the first World Cup match.

Achilles, a deaf white cat who is the official animal soothsayer for the tournament, on Wednesday chose a bowl of food bearing the host's flag rather than that of Saudi Arabia, who Russia will face on Thursday evening.

The blue-eyed feline is usually part of a team of dozens of cats that guard Saint Petersburg's Hermitage museum from rodents, but has taken on a new role for the football event.

"Achilles is already used to the public and shouldn't be too stressed," said vet Anna Kondratyeva, who manages the animals.

The cat follows in the tentacle-prints of Paul the Octopus who became a star in 2010 after predicting winners for that year's World Cup by choosing one out of two boxes containing food.

Others have made a play to be the next Paul -- including Swiss guinea pig Madame Shiva in 2014 and British Piranha Pele -- but none quite had the mollusc's foresight.

Earlier in the day the head of the Russian Orthodox Church Patriarch Kirill said he would pray for the national team to give a worthy performance.

The hosts, who take on Saudi Arabia in the Thursday curtain raiser, need all the moral support they can get as they come into the event without a win in seven games.