Indian-American Jitendra Diganvker announces to run for US Congress

Diganvker said that he is running for Congress to give a voice to the hard-working middle-class Americans that are often ignored. 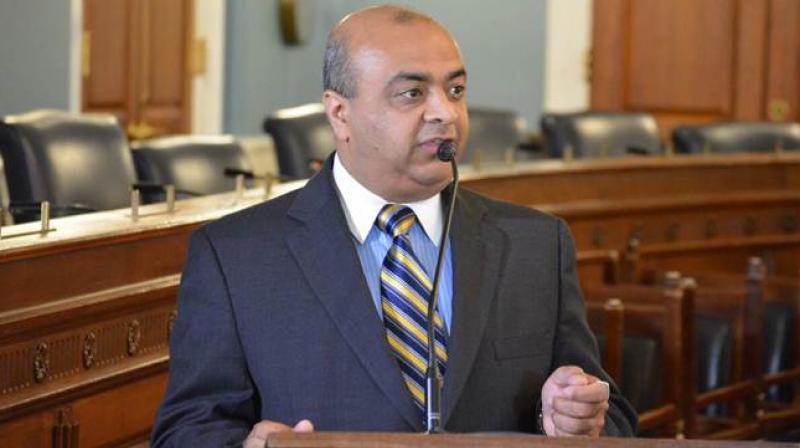 If nominated by the Republican Party, it would be for the first time that an Indian-American would be pitted against another in a Congressional election. (Photo: Jitendra Diganvker | Twitter)

Washington: Indian-American Jitendra Diganvker has announced to run for the US House of Representatives in the 2018 Congressional elections.

If elected by his Republican party in the primaries, Diganvker, a business owner and community worker, would be pitted against popular Democratic Incumbent Raja

Krishnamoorthi from the 8th Congressional District of Illinois.

I am running for congress to give a voice to hard working middle class Americans often ignored by career politicians in DC. pic.twitter.com/cGmUwExXgo

A suburb of Chicago, the Congressional District has a sizeable Indian-American population.

Krishnamoorthi, who has carved a niche for himself in the last 10 months in the US Congress through his articulate views on key issues like national security, immigration and economy, is backed by the former US President Barack Obama.

If nominated by the Republican Party, it would be for the first time that an Indian-American would be pitted against another in a Congressional election.

Diganvker said that he is running for Congress to give a voice to the hard-working middle-class Americans that are too often ignored by career politicians in Washington DC.

"Immigrating to our great country, my family and I have experienced many highs and lows. My family came to America to achieve the American dream--to succeed or fail by our hard work and commitment. Today, career politicians have left behind hard-working middle-class Americans. I will be a voice for those very people who have been left behind, because my family is one of them," Diganvker said.

He lost his two daughters in a tragic house fire in 1999, which drove him to become a compassionate community servant.

He said he has seen first-hand, how burdensome government regulations and rising health care costs can discourage the entrepreneurial spirit.

"I am not a politician. While most politicians pass laws yet never feel the effects of their actions, I come from real America. I have felt these struggles and know first-hand the consequences of Washington's action, and inaction, on issues important to middle-class families. I will be the voice of everyday Americans in Washington," he said in a media release.

The US House of Representative currently has four Indian Americans.

Ami Bera from California is the three-term lawmaker. Three others, Ro Khanna from California, Raja Krishnamoorthi from Illinois and Pramila Jayapal from Washington State were elected to the Congress last year.

All of them would be seeking re-election next year. Kamala Harris from California is the first Indian-origin American Senator. She was elected to the Senate last year. She is of mixed parental heritage.