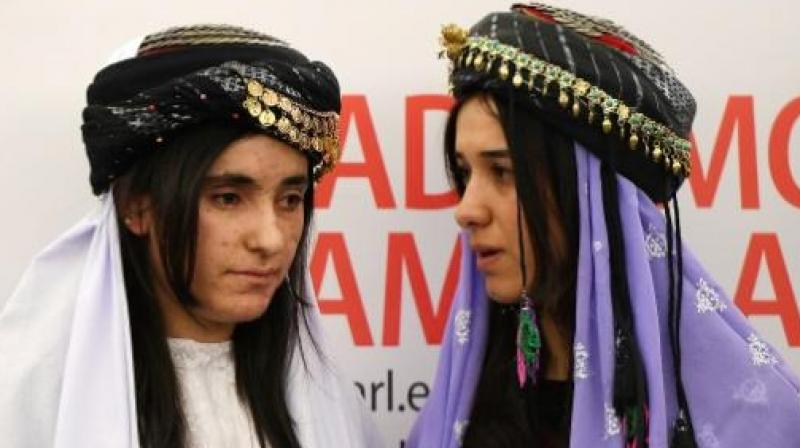 Nadia Murad and Lamia Haji Bashar wear traditional bejewelled hats atop headscarves, were often unable to hold back their tears during the ceremony in the parliament building. (Photo: AFP)

Strasbourg: Two Yazidi women activists pleaded tearfully on Tuesday for Europe to bring Islamic State group leaders to justice for the crime of genocide, as they accepted the EU's Sakharov human rights prize.

Nadia Murad and Lamia Haji Bashar also urged Europe to consider admitting 500,000 Yazidi refugees from Iraq, when the pair received the award from the European Parliament in Strasbourg, France.

"I ask you urgently to promise us that you will never again allow such things, that these criminals will be prosecuted and will answer for their deeds," Bachar, 18, told the assembly.

Bashar, who has deep facial scars and lost an eye due to horrific burns from a landmine during her escape from Islamic State, was accompanied by her younger brother with whom she was reunited only the day before.

Murad, 23, called for establishing "zones protected by the international community" in Iraq, saying she looked to Europe as a "symbol of humanity".

The pair, wearing traditional bejewelled hats atop headscarves, were often unable to hold back their tears during the ceremony in the parliament building.

The women have become figureheads for the effort to protect the Kurdish-speaking Yazidi minority after having survived a nightmare captivity at the hands of the jihadists.

The United Nations says IS committed genocide against the minority. Thousands of Yazidis were massacred when IS took over the Sinjar area in August 2014 with thousands of Yazidi women abducted and turned into sex slaves.

"There is no doubt. Daesh committed a mass genocide," Murad said, referring to the Arabic term for IS.

"If the world is not able to protect us on our land, I invite you Europeans to open your doors to provide refuge to 500,000 Yazidis from Iraq," Murad said.

Yazidi leaders say that up to 3,000 of their women remain enslaved by the Islamic State group.

Named after the dissident Soviet scientist Andrei Sakharov, who died in 1989, the prize is awarded every year to honour individuals who combat intolerance, fanaticism and oppression, often falling foul of their governments as a result.