Rudy Giuliani to be Donald Trump's Secretary of State?

Giuliani was an early supporter of Trump and defended him vigorously through various controversies that ensnared the New York businessman. 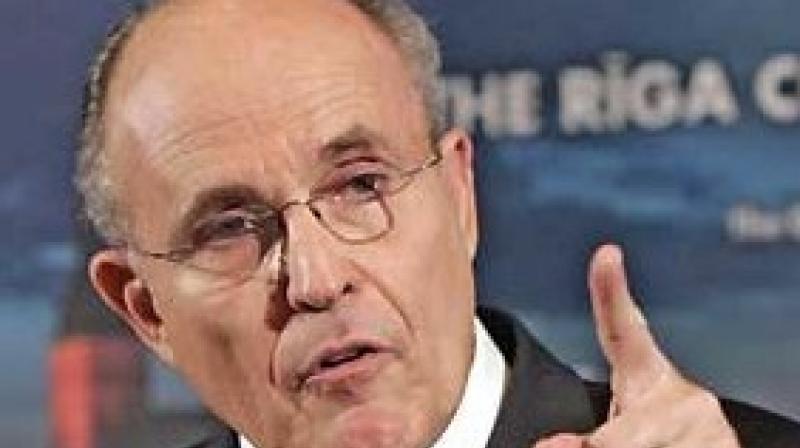 Giuliani, 72, was one of Trump's most vocal and high-profile supporters on the campaign trail, introducing him frequently at rallies with slashing attacks against Democrat Hillary Clinton. (Photo: AP)

Washington: Former New York City Mayor Rudy Giuliani has emerged as a leading candidate to be US secretary of state for President-elect Donald Trump, a source familiar with the situation said on Monday.

The source said John Bolton, who served as U.S. ambassador to the United Nations under President George W. Bush, was also under consideration to head the State Department.

Giuliani, 72, was one of Trump's most vocal and high-profile supporters on the campaign trail, introducing him frequently at rallies with slashing attacks against Democrat Hillary Clinton.

He was New York's mayor during the Sept. 11, 2001, attacks and led the city during the crisis after the destruction of the World Trade Center twin towers, working closely with then-President George W. Bush.

Giuliani was an early supporter of Trump, has been his friend for many years, and defended him vigorously through the various controversies that ensnared the New York businessman.

His rhetoric was notable for repeatedly accusing Clinton of having violated laws through her handling of classified information on a private email server while she was secretary of state from 2009 to 2013.

"If Rudy wants it, he'll get it," former House of Representatives Speaker Newt Gingrich told "The Kelly File" on Fox News.

Gingrich, who has also been mentioned as possibly having a role in the Trump administration, said he thought Giuliani might have been interested in being nominated instead as the U.S. attorney general or secretary of homeland security.

However, he said Giuliani would do a fabulous job as Trump's secretary of state.

Bolton, 67, a senior fellow at the American Enterprise Institute think tank, was U.N. ambassador to the United Nations from August 2005 to December 2006 during the Bush administration.

Before that he was under secretary of state for arms control and international security. He has frequently provided foreign policy advice to Republican presidential candidates.

Trump is working on choosing the people he wants to place in his Cabinet for when he takes over the presidency on Jan. 20.

In a sign that Trump might be getting closer to some decisions, his spokesman Jason Miller said Trump would meet Vice President-elect Mike Pence, who is in charge of Trump's transition effort, at Trump Tower in New York on Tuesday.

Miller said Trump and Pence would be "reviewing a number of names for key jobs."