She discovered a passion for flying and obtained her pilot's license becoming the youngest certified civilian female pilot from Afghanistan. 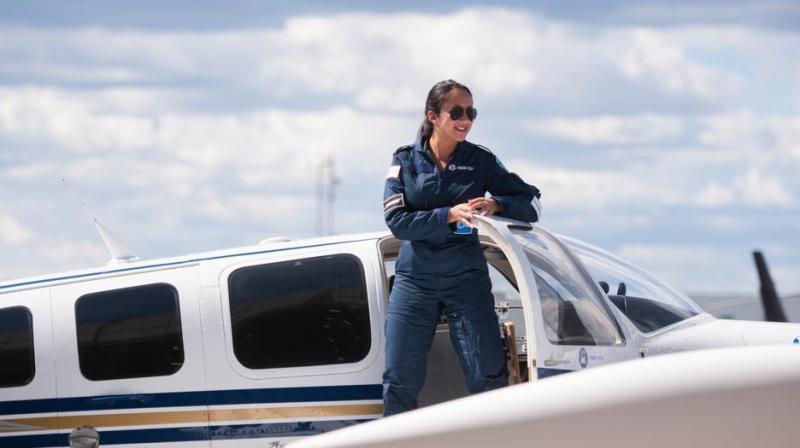 Montreal: An Afghan pilot hoping to become the youngest woman in history to complete a solo round-the-world flight was preparing Monday to start the Transatlantic leg of her journey.

Shaesta Waiz, 29, was born in a refugee camp at the end of the Soviet war in Afghanistan before immigrating with her family to the United States in 1987.

There, she discovered a passion for flying and obtained her pilot's license -- becoming the youngest certified civilian female pilot from Afghanistan. Now she wants to share that sense of freedom of soaring high above ground with other young women.

"What's important is finding your passion and going after it." Waiz took off from Daytona Beach, Florida on Saturday and has mapped out a route that will take her aboard her Beechcraft Bonanza A36 aircraft approximately 25,800 kilometers to more than 18 countries, including Spain, Egypt, India, Singapore and Australia, before ending the trip back in Florida in August.

During her 30 stopovers, the engineering graduate and the International Civil Aviation Organization (ICAO), which is backing her trip, will host events to try to get schoolchildren interested in science -- notably aeronautics.

According to ICAO figures, less than five percent of commercial pilots are women.
"If you really break it down into science, technology, engineering and math and explore what those career fields offer, it's very exciting," Waiz said.

"We hope to present to the young kids at these events what those careers are, and hopefully get them to pursue these careers that are in need of more talent." On the website of her non-profit Dreams Soar, she commented: "Every time I open the door of an aircraft, I ask myself, 'How did a girl with my background become so lucky? The truth is, anyone can be me."