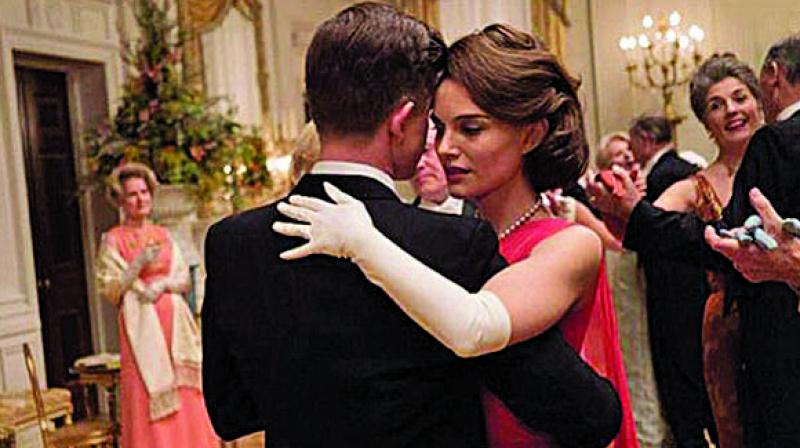 Natalie Portman in a still from Jackie, in which she plays the role of late US First Lady Jacqueline Kennedy.

Los Angeles: She is famous for jealously guarding her privacy, favoring a small wedding to a lavish celebrity ceremony and taking her grandmother’s maiden name to shield her family from the limelight.

But Natalie Portman said on Monday that portraying grief-stricken Jacqueline Kennedy had taught her the virtue of celebrities giving more of themselves to the public. Jackie, Chilean filmmaker Pablo Larrain’s first English-language feature, is a searing and intimate portrait of the First Lady in the week after John F Kennedy’s assassination in 1963.

Ms Portman told journalists at the American Film Institute’s AFI Fest in Los Angeles, where Jackie was getting its US premiere, how she admired the stoic and dignified face Jackie put on for the public.

“It’s understanding that even when she was going through something incredibly private, it meant something to other people how she presented herself publicly,” Ms Portman, 35, said. “It’s like other people share in whatever you’re going through and that’s really impressive that she was able to do that,” she added.

Born Neta-Lee Hershlag in Jerusalem to a doctor father and an artist mother, Ms Portman has taken on tough roles since starting her big-screen career. She got her break at age 11 in The Professional, the tale of a hitman-for-hire (Jean Reno) who becomes the mentor to a young girl.

But she turned down 1996’s Romeo + Juliet because of the age difference between her and Leonardo DiCaprio, and rejected the 1997 remake of Lolita, which she deemed sleazy. She also signed on to Anywhere But Here (1999) with Susan Sarandon only after a nude scene was dropped.

“I value my private life and security way more than getting parts by flashing my boobs on some magazine or being a sex symbol in films,” she said in a 2000 interview. Ms Portman won a best actress Oscar for 2010’s psychological ballet thriller Black Swan.

It was on the set of that film she met her future husband, French dancer and choreographer Benjamin Millepied, with whom she is expecting a second child.