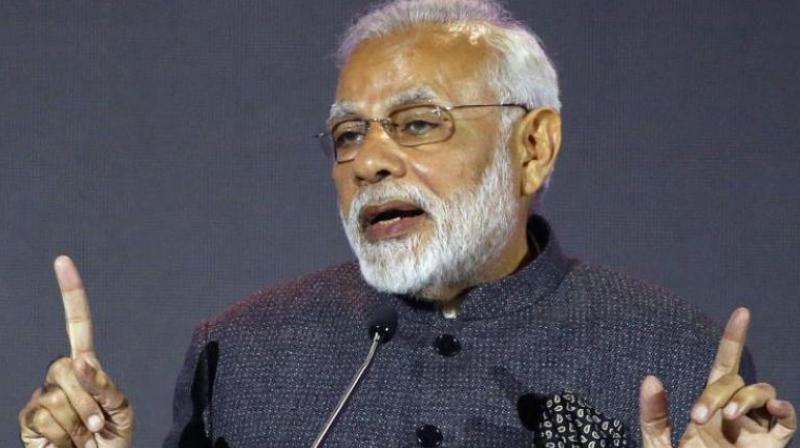 Pew said the public's 'positive assessment' of Modi is buoyed by 'growing contentment' with the Indian economy. (Photo: AP/File)

Washington: Prime Minister Narendra Modi remains "by far" the most popular figure in Indian politics, the Pew said on Wednesday, releasing the main findings of its latest survey conducted among 2,464 respondents in India.

Pew said the public's "positive assessment" of Modi is buoyed by "growing contentment" with the Indian economy: more than eight-in-ten say economic conditions are "good", up 19 percentage points since immediately before the 2014 election.

The share of adults who say the economy is "very good" (30 per cent) has tripled in the past three years, it added.

Overall, seven-in-ten Indians are now "satisfied" with the way things are going in the country. This positive assessment of India's direction has nearly doubled since 2014, Pew said.

According to Pew, at least nine-in-ten Indians in the southern states of Andhra Pradesh, Karnataka, Tamil Nadu and Telangana and in the western states of Maharashtra, Gujarat and Chhattisgarh hold a favorable view of the prime minister.

The same is true for more than eight-in-ten in the eastern states of Bihar, Jharkhand,  Odisha and West Bengal and the northern states of Delhi, Haryana, Madhya Pradesh, Punjab, Rajasthan and Uttar Pradesh.

"Since 2015, Modi's popularity is relatively unchanged in the north, has risen in the west and the south, and is down slightly in the east," it said.

Notably, the survey reflects a 21 percentage points drop in favorable view of America among Indians from 70 per cent in 2015 to just 49 per cent in 2017.

Only 40 per cent express confidence in President Donald Trump to do the right thing regarding world affairs, down 34 points from their faith in his predecessor Barack Obama in 2015.

Same is the case with China, whose favourability rating among Indians have dropped from 41 per cent in 2015 to 26 per cent in 2017. The survey was conducted before the Doklam crisis.

"Similarly, despite Prime Minister Modi's decision last November to abolish high-value bank notes, less than half of the Indian population sees the lack of availability of cash to be a major problem," it said.