Maestro has designed the music on santoor, keyboard and flute in Raag Desh to emphasise the rainy season. 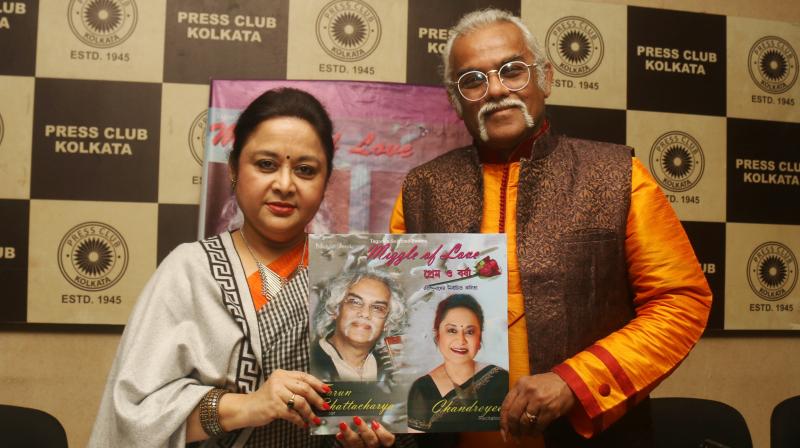 Pandit Tarun Bhattacharya and elocutionist, Chandreyee Dutta Guha Roy have come together for Mizzle of Love, an audio album featuring a unique collaboration of music and poetry by Tagore.

Tagore’s works on Monsoon are depicted in this album.

The maestro has designed the music on santoor, keyboard, flute in Raag Desh emphasising monsoon as reflected in the voice of Chandreyee Dutta Guha Roy

Speaking about the album, Bhattacharya says, “Of all the seasons, Varsha ( Monsoon) or the rainy season was a great favourite with Tagore. Varsha was his lover and that is how he saw Varsha.”

He goes on to add, “His outpourings of the season captured myriads of its mood and beauty. Sometimes he yearned for it waiting anxiously for its arrival, while in some poems and songs he reveled in her beauty.”

The album is based on Tagore’s mystic love for monsoon and its splendours which have been rhythmically expressed through Chandreyee’s mellifluous voice and soft tonal quality of santoor by one India’s greatest living instrumentalists Tarun Bhattacharya.

Ragas like Miyan Ki Malhar, Megh Malhar and Desh have been mellifluously harmonised with the wordings in the albums while some songs incorporate essences of Baul and Bhatiali, that impart the deep philosophical essence of life that the season sometimes evokes. Traditional folk tunes add colour to the monsoonal songs.