Father-daughter duo were the first Indians to traverse Mt Elbrus (5642 m) from the North side to the South Side (via the summit) in 2012. 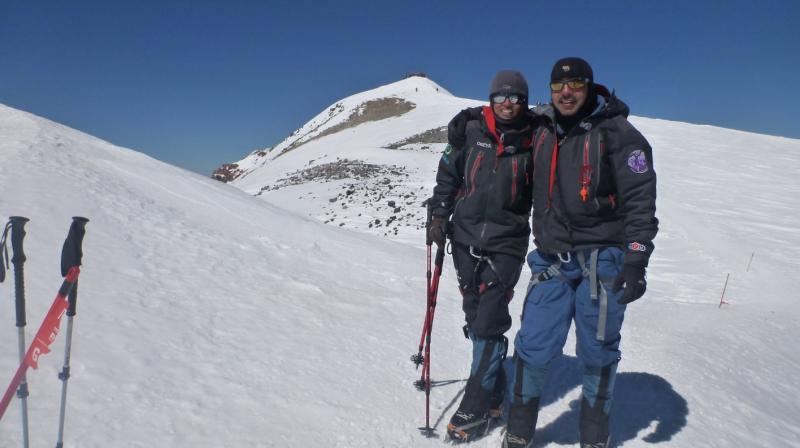 Ajeet Bajaj, a renowned adventurer-explorer, and Deeya, his fearless daughter-protégé and mountaineer, embarked on this incredible journey last month on April 16 when they reached base camp at 16,700 feet above sea level.

Ajeet Bajaj, a renowned adventurer-explorer, and Deeya, his fearless daughter-protégé and mountaineer, embarked on this incredible journey last month on April 16 when they reached base camp at 16,700 feet above sea level.

Their expedition offered them varied experiences from hard acclimatisation hikes to North Col at 23,000 feet to easy Uno days at the base camp, from wi-fi connectivity at the base camp to short satellite phone conversation with family while on acclimatisation hikes and the SOS (Scenic Overdose Syndrome) that followed them everywhere and the adventurous duo thoroughly enjoyed their journey to Chomolungma (the Tibetan name for Mt Everest).

Taking a host of high-altitude-related dangers, sub-zero temperatures and extremely windy days in their stride, the duo went onto courageously achieve their goal of summitting Mt Everest.

As Ajeet caught his first glimpse of Mount Everest on the expedition, he said, “We are looking at Mt Everest - a Mother Goddess, one of the natural wonders of the world. We realise how small and insignificant human beings are in the larger scheme of things. We can never conquer mountains or nature and have to learn to approach the mountain with a huge amount of respect and humility. Mother Nature is Supreme.”

The father-daughter duo has trail-blazed adventurous expeditions in the past too. In 2012, they were the first Indians to traverse Mt Elbrus (5642 m) from the North side to the South Side (via the summit).

Mt Elbrus (Russia) is the highest mountain in Europe. In May 2011, Ajeet and Deeya skied from the west to the east coast of Greenland, skiing 550 kms over 21 days.

The adventure duo are the first Indians to ski across the Greenland Ice Cap. Their feat was acknowledged by the Limca Book of World Records.

Ajeet is the first Indian to ski to both the North Pole and the South Pole and for his achievements, Ajeet was conferred the Padma Shri by the President of India.

Deeya completed her advanced course in mountaineering from Nehru Institute of Mountaineering (NIM), Uttarkashi and was conferred with the Best Trainee Award after her Basic Course from NIM in 2012. Deeya is a graduate from Cornell University, an Ivy League college in the US.

This new milestone is very special for Deeya as she hopes that her journey and the encouragement she received from her father will be a beacon to the Girl-Child in India. This father-daughter duo has also become an inspiration for millions of men and women who aspire to scale new heights.