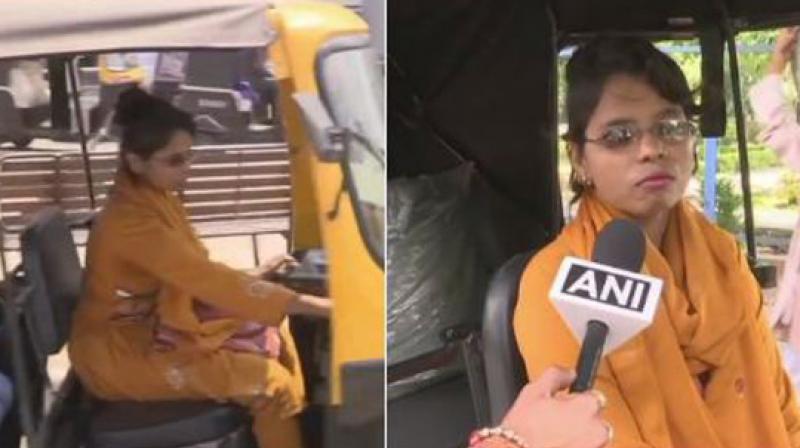 Jahan and her mother were lauded by Madhya Pradesh Chief Minister Shivraj Singh Chouhan, who not only handed them the vehicle's key but also hopped in for a ride. (Photo: ANI)

Bhopal: Talat Jahan, Bhopal's first female auto-driver has been breaking all societal norms to create an identity for herself.

Jahan, who has been a victim of domestic violence and dowry abuse, first sat on the driver's seat two months ago after undergoing proper training in 2016 along with her mother, Firoza B. Jahan now earns around Rs. 400 to Rs. 500 per day.

The mother-daughter duo then managed to save enough money over the years and finally bought an auto of their own. The two women were lauded by Madhya Pradesh chief minister Shivraj Singh Chouhan, who not only handed them the vehicle's key but also hopped in for a ride.

"It's been two months since I started driving an auto. I underwent training in 2016. People have to stop thinking that women can't do anything. We are capable of doing every possible task and shouldn't be underestimated," Jahan told ANI.

She added, "Whenever someone comments on a girl driving the auto, I take it in a positive way that maybe they haven't seen any girl do this before and a sense of pride engulfs me. Also, I do this because I like my work and not because I don't have any other option."

Meanwhile, Firoza, Jahan's mother, said: "Both my daughter and I went for a 15-day auto-driving training along with other women. My daughter leaves at 8 in the morning and comes back around 7 in the evening."

Talking about how she is often questioned about letting her daughter go out for such long hours, she added, "I am proud of my daughter. Whenever people question me of allowing her to drive an auto and show concern for her safety, I shut them up by saying that an accident can happen inside the house as well."

Talat now proudly drives around the city, becoming the only woman auto-driver making a living out of the male-dominated bastion. She has appealed to people to support their girl children stand on their feet and make a career of their own.