Dev, who led India to the emphatic World Cup victory in 1983, is considered as the country's greatest all-rounder 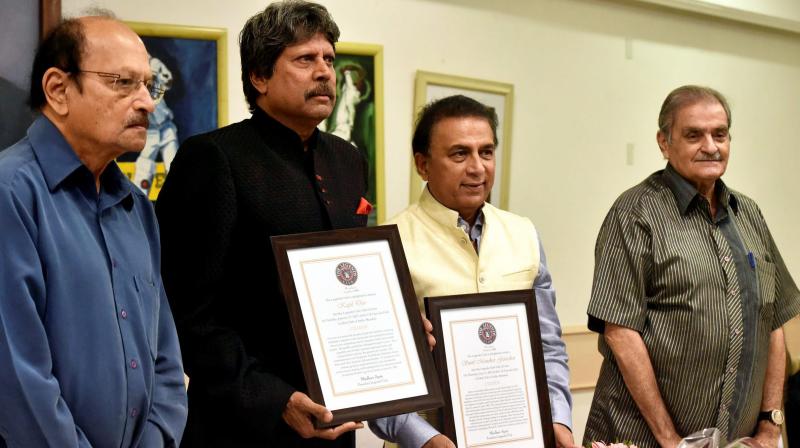 He was presented with a citation by former India player and Legends Club President Madhav Apte. (Photo: PTI)

Dev, who led India to the emphatic World Cup victory in 1983, is considered as the country's greatest all-rounder. He was presented with a citation by former India player and Legends Club President Madhav Apte.

Gavaskar, who was the first batsman to score 10,000 runs in Test cricket, was also presented a citation by Wadekar. He was already inducted into the club's Hall of Fame on July 11, 2013.

Accepting the honour, the Haryana Hurricane said, "There is nobody in this country who do not want to be Sunil Gavaskar. For Sunil, was he best in the best in the game, no, he was best for the game.

"Lot of people will come in, but this name (Sunil) will remain on the top. We had a passion for the game and were not looking for rewards and awards, anything. At that time we had so much of passion. With our success, if people get happiness, you feel proud about it. Now I feel, cricket has changed (and) it feels so nice," said Dev.

"I was not technically correct, but we had no one to teach. In Mumbai, there were a lot of teachers. When we played cricket, there were no turf wickets in Chandigarh, what was there is passion," he remembered.

Dev, also recalled that his wife Rommie's grandfather had asked "ladka kya karta hai (What does the boy do), wo cricket kelta hai, wo theek hai, par wo karta kya hai (he plays cricket, but what does he do)".

Describing Kapil as India's greatest match winner, Gavaskar said, "For me it was an absolute honor to have played in the same team (as Kapil). With due respect to all those wonderful players who have won matches for India over the last years, there has been nobody who has turned around with bat and ball as Kapil has.

"It has been hardwork for him, it has not been easy. His enthusiasm is absolutely incredible. (It was) hard time for me as a captain to stop him," recalled Gavaskar.

Gavaskar remembered that the idea of dropping Kapil from the team did not come from him and referred to an article.