As a teen, MP women’s cricket skipper cut her hair, dressed as boy to play, get entry into coaching club. 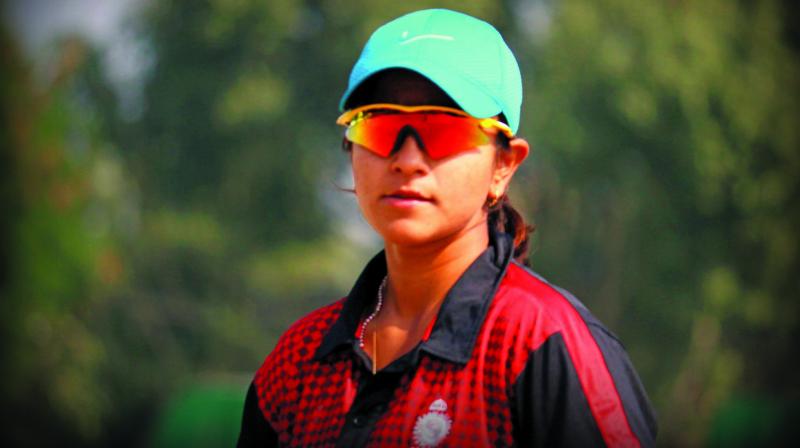 After braving all odds as a teen, all rounder Tamanna Nigam now wants to represent India.

Bhopal: “My hands are not to wear bangles, but to wield the willow.” Tamanna Nigam, captain of senior women’s cricket team of Madhya Pradesh, reminds herself of the line every time she takes guard on the pitch to open batting for her side. It gives her an adrenaline rush.

Growing up, she faced rejection for being a girl but given her never-say-die attitude, she found a way around it. She started dressing up as a boy.

It was her father, a government school teacher, who introduced her to the sport when she was all of two, and remains her biggest support system so far. Yogeswar Nigam’s first gift to her daughter was a tiny cricket bat.

“As far as my memory goes, the first toy I was introduced to was a tiny cricket bat. Generally, little girls are mesmerised by dolls, but that cricket bat was my best playmate at that age,” Tamanna, who is currently pursuing a post graduate in Sociology from Barkatullah university here, told this newspaper while recounting her childhood days.

But as she grew up, she realised that “gully (lane) cricket” — the usual launch pad for budding cricketers — was an exclusive boys’ club.

She vividly remembers the day she volunteered to play cricket with the boys in her neighbourhood when she was eight. The boys had then dismissed her proposal saying, mockingly, that cricket was not a “girl’s game”.

“Cricket was my passion. And that incident only strengthened my resolve to pursue the sport come rain or shine. I promised myself then that I would come back to the field and beat all the boys in the game,” Tamanna recalled. That was the beginning of how she came to dress as a boy so she could play cricket.

She took two of her cousins into confidence and cut her hair short, akin to a boy’s. She was then introduced to other boys in the field as “Tikku” by her two cousins, and that marked her debut in “gully” cricket.

Fortunately, she did not have to make up a name for Tikku, a unisex name, was what her parents called her at home.

“I also used to act like a boy while interacting with other players on the field so as not to get caught.”

She recalls getting furious one day when one of the boys berated another by saying he was “fielding like a girl”.

“The way he had drawn a parallel between a girl and poor fielding had angered me. I confronted him by asking if he thought of ‘girl’ as a derogatory word,” Tamanna recalls.

When she was 12, she recounts taking to a male name “Rohit” to gain entry into Arera Cricket Academy — one of the best cricket coaching clubs in Bhopal — to get cricket coaching after taking her coach into confidence. The academy was exclusively reserved for boys back then. Nobody in the academy had an inkling of her identity, barring 2-3 boys.

“My father has been a pillar of strength all through my struggle during that period,” says Tamanna, now 21.

Her joy knew no bounds when, in 2009, she was selected for the Under-19 women’s cricket team of MP. And she never looked back.

Two years later, she was selected to play for senior women’s cricket in the state and led her team to super-league level in 2012-13 and 2013-14 seasons — a feat the team saw after a long time.

Tamanna, an all rounder, now has her eyes set on India women’s team.

When asked what gives her most satisfaction today, she quipped, “Thankfully, I do not have to fight for my place as a man in a man’s world anymore,”