Suu Kyi on Monday while breaking her silence on the issue said that Myanmar 'does not fear international scrutiny.' 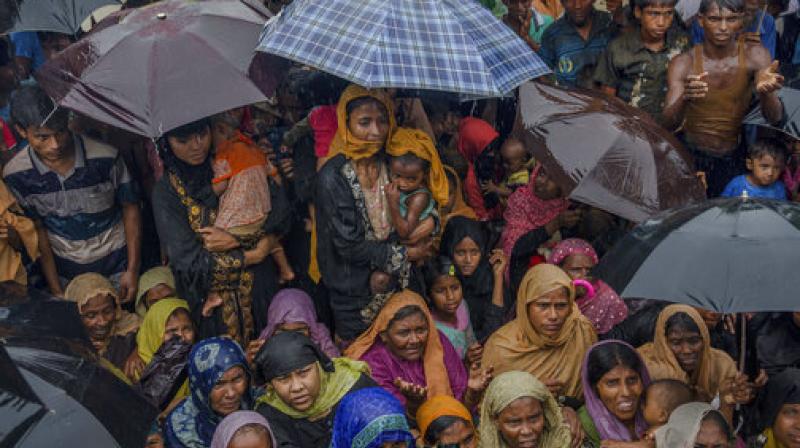 The video criticises Myanmar’s State Counsellor and de facto leader Aung San Suu Kyi and takes a dig at her for being chosen for Nobel Peace Prize. (Photo: AP)

Srinagar: A Kashmiri rapper who goes by the stage name ‘Emcee Ame’ and is inclined to solidarity with the Rohingya Muslims has composed a song to highlight their plight and against apartheid and oppression they are allegedly faced with in Buddhist-Majority Myanmar.

The video ‘Rohingya-Silent Genocide’ by the ‘The Rapper From The Alleys Of Downtown’ Aamir Ame, 23, was released on his Youtube channel on September 17. The song is featured by Kay-y and Menime and has been written and composed by Emcee Ame and supported by Kay-y (Khan Yawar).

It complains about “double standards” of the world and “apathy” being exhibited on the issue of Rohingya Muslims. “We are with the oppressed and it doesn’t matter which religion they belong to. We decided to go in solidarity with the Rohingyas because they are facing annihilation in the hands of despots,” said Aamir Ame. He added, "Basically I'm a political rapper rather a conscious rapper who can't be a silent spectator when something wrong is happening around."

His 2.50 minute video is a mix of Urdu and English. While in English it elucidates the plight of the Rohingya Muslims and the world’s response thereto, the lyrics in Urdu by Khan Yawar (Kay-y) pose the question to God if bloodshed is taking place and the earth and the sky are in tears with His assent.’ A number of photographs depicting the happenings in Myanmar’s Rakhine state and protests held in various parts of the world against the alleged persecution of the Rohingyas are part of the song.

It criticises Myanmar’s State Counselor and de facto leader Aung San Suu Kyi, takes a dig at her being chosen for Nobel Peace Prize and laments the “silence” adopted by various countries on the plight of the Rohingyas.

Suu Kyi had on Monday while breaking her silence on the issue said in a live televised address that she was "aware of the fact that the world's attention is focused on the situation in Rakhine State" and that Myanmar "does not fear international scrutiny." The song asks her as to why she is bothered about her power and pride while people are being killed in front her.

Ame and Yawar said that they are witness to the events and incidents that unfolded back home during past nearly three decades and have chosen the side of the oppressed “whichever place he or she belongs to or whatever his or her religious belief is.”