Newsmakers   19 Sep 2020  The Notorious RBG: A legacy marked by triumphs for equality for women
Newsmakers

In 2018, Ginsburg was the subject of a documentary and a feature film ‘On the Basis of Sex,’ in which the actor Felicity Jones portrayed her 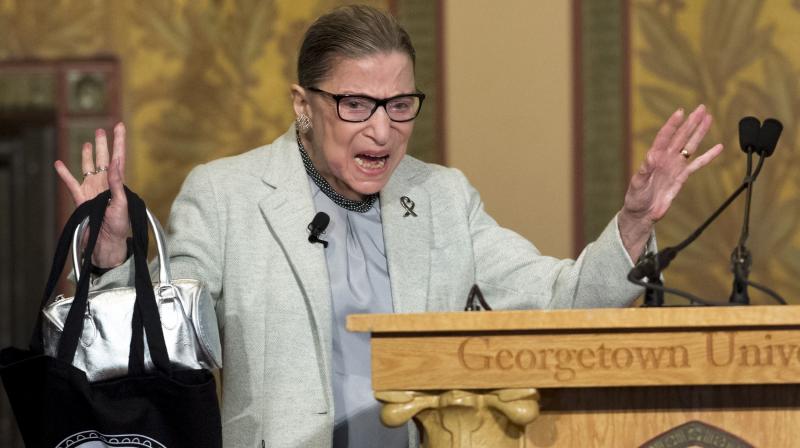 When the court was in session, she often had her head down, sometimes leading visitors to think she was asleep. She once acknowledged that she did occasionally nod off. She once confessed to dozing during a State of the Union.

But it was a mistake to equate her gait and gaze with frailty, for Ginsburg showed over and over a steely resilience in the face of personal loss and serious health problems that made the diminutive New Yorker a towering women’s rights champion and forceful presence at the court over 27 years.

She made few concessions to age and recurrent health problems, working regularly with a personal trainer. She never missed any time in court before the age of 85, and then only the following surgery in December 2018 for lung cancer.

Ginsburg died Friday of complications from metastatic pancreatic cancer at her home in Washington at 87, the court said.

Late in her court tenure, she became a social media icon, the Notorious RBG, a name coined by a law student who admired Ginsburg’s dissent in a case cutting back on a key civil rights law.

The justice was at first taken aback. There was nothing “notorious” about this woman of rectitude who wore a variety of lace collars on the bench and often appeared in public in elegant gloves.

But when her law clerks and grandchildren explained the connection to another Brooklynite, the rapper The Notorious B.I.G., her scepticism turned to delight. “In the word the current generation uses, it’s awesome,” Ginsburg said in 2016, shortly before she turned 83.

In 2018, Ginsburg was the subject of a documentary and a feature film “On the Basis of Sex,” in which the actor Felicity Jones portrayed her.

In her final years on the court, Ginsburg was the unquestioned leader of the liberal justices, as outspoken in dissent as she was cautious in earlier years.

Criticizing the court’s conservative majority for getting rid of a key part of the landmark Voting Rights Act in 2013, Ginsburg wrote that it was like “throwing away your umbrella in a rainstorm because you are not getting wet.”

Her stature on the court and the death of her husband in 2010 probably contributed to Ginsburg’s decision to remain on the bench beyond the goal she initially set for herself, to match Justice Louis Brandeis’ 22 years on the court and his retirement at the age of 82.

Ginsburg had a special affection for Brandeis, the first Jew named to the high court. She was the court’s second woman and its sixth Jewish justice. In time she was joined by two other Jews, Stephen Breyer and Elena Kagan, and two other women, Kagan and Sonia Sotomayor.

Both developments were perhaps unthinkable when Ginsburg graduated from law school in 1959 and faced the triple bogey of looking for work as a woman, a mother and a Jew.

Forty years later, she noted that religion had become irrelevant in the selection of high-court justices and that gender was heading in the same direction, though when asked how many women would be enough for the high court, Ginsburg replied without hesitation, “Nine.”

She could take some credit for equality of the sexes in the law. In the 1970s, she argued six key cases before the court when she was an architect of the women’s rights movement. She won five.

“Ruth Bader Ginsburg does not need a seat on the Supreme Court to earn her place in the American history books,” President Bill Clinton said in 1993 when he announced her appointment. “She has already done that.”

Her time as justice was marked by triumphs for equality for women, as in her opinion for the court ordering the Virginia Military Institute to accept women or give up its state funding.

There were setbacks, too. She dissented forcefully from the court’s decision in 2007 to uphold a nationwide ban on an abortion procedure that opponents call partial-birth abortion. The “alarming” ruling, Ginsburg said, “cannot be understood as anything other than an effort to chip away at a right declared again and again by this court — and with increasing comprehension of its centrality to women’s lives.”

Ginsburg once said that she had not entered the law as a champion of equal rights. “I thought I could do a lawyer’s job better than any other,” she wrote. “I have no talent in the arts, but I do write fairly well and analyze problems clearly.”

Besides civil rights, Ginsburg took an interest in capital punishment, voting repeatedly to limit its use. During her tenure, the court declared it unconstitutional for states to execute the intellectually disabled and killers younger than 18.

In the most divisive of cases, Ginsburg was often at odds with the court’s more conservative members. Yet she was personally closest on the court to Justice Antonin Scalia, her ideological opposite.

She once explained that she took Scalia’s sometimes biting dissents as a challenge to be met. “How am I going to answer this in a way that’s a real putdown?” she said. Scalia died in 2016.

As for her own dissents, Ginsburg said that some were aimed at swaying the opinions of her fellow judges while others were “an appeal to the intelligence of another day” in the hopes that they would provide guidance to future courts.

“Hope springs eternal,” she said in 2007, “and when I am writing a dissent, I’m always hoping for that fifth or sixth vote — even though I’m disappointed more often than not.”

Joan Ruth Bader was born in Brooklyn in 1933, the second daughter in a middle-class family. Her older sister, who gave her the lifelong nickname “Kiki,” died at age 6, so Ginsburg grew up in Brooklyn’s Flatbush section as an only child. Her dream, she has said, was to be an opera singer.

Her mother, Celia Bader, died of cancer the night before Ginsburg, then 17, was to graduate from high school. Celia Bader never attended college but worked as a bookkeeper. In a public television documentary about Jewish Americans, Ginsburg said, “What’s the difference between a bookkeeper in New York’s Garment District and a U.S. Supreme Court justice? One generation.”

She first gained fame as a litigator for the Women’s Rights Project of the American Civil Liberties Union. She had worked on the legal team that persuaded the high court to rule for the first time ever in 1970 that a state had violated the Constitution by denying women equal treatment.

At argument sessions in the ornate courtroom, Ginsburg was known for digging deep into case records and for being a stickler for following the rules.

She was more comfortable than most with long silences, and in the several interviews Ginsburg granted this reporter in her office at the court, it was difficult, but rewarding, to resist the natural tendency to fill those silences with another question. The most interesting things she said typically followed long pauses.

Appearing at a law school forum in 2008, she noted with relief that there was no retirement age for U.S. judges. “We hold our offices during good behaviour,” Ginsburg said, citing language from the Constitution. “So all of my colleagues behave very well.”

She married her husband, Martin, in 1954, the year she graduated from Cornell University. She attended Harvard University’s law school but transferred to Columbia University when her husband took a law job in New York.

Ginsburg had graduated at the top of her Columbia Law School class but could not find a law firm willing to hire her. She later said she’d had more than her share of “mazel” — the Hebrew word for luck — to help her along in life.

“Suppose there had been a Wall Street firm interested in hiring me? What would I be today?” she intoned in 2007. “A retired partner.”

In 1999, Ginsburg had surgery for colon cancer and received radiation and chemotherapy. She had surgery again in 2009 after being diagnosed with pancreatic cancer and in December 2018 to remove cancerous growths on her left lung.

In 2019, doctors treated Ginsburg with radiation for a tumour on her pancreas. She maintained an active schedule even during the three weeks of radiation. When she revealed a recurrence of her cancer in July 2020, this time with lesions on her liver that were treated with chemotherapy every two weeks, Ginsburg said she remained “fully able” to continue as a justice.

She is survived by two children, Jane and James, and several grandchildren.

Her determination was perhaps most evident on the day the court met for the final time in June 2010. Her husband had died a day earlier, and her children told her their father would want her to go to work. The justices filed into the courtroom that Monday and Ginsburg were there.