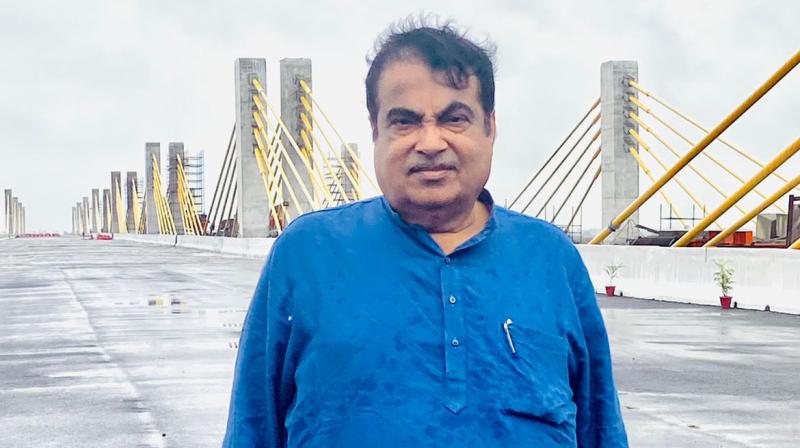 Union Minister of Road Transport & Highways Nitin Gadkari during the inspection of a bridge built across the Narmada river near Bharuch, Friday, Sept. 17, 2021. (Twitter)

Nagpur: They say politicians rake in crores, but Nitin Gadkari earns in lakhs. Check his YouTube videos and you'll know.

Gadkari recently said he gets Rs four lakh every month as royalty from YouTube, as viewership of his lecture videos posted on the popular video streaming platform has increased during the pandemic period.

An aide to the senior Union minister told reporters that the earnings from YouTube may not always be as high as the sum he mentioned, but they are substantial as he has a large, dedicated following, always awaiting new videos for his frank some say brutally frank views on diverse topics.

And the videos are aplenty. The aide says Gadkari addresses anywhere between five to seven webinars' daily from his residences in Nagpur or Delhi and has so far held around 1500 such virtual interactions during the pandemic.

Soon after the first national lockdown was imposed, Gadkari started addressing events and various programmes through video links. Starting from April 2, 2020, Gadkari has been a part of almost 1500 such events, reaching out to crores of people across India and abroad, the aide says.

While the topics he has touched in the online interactions range from the gym to the gem' sector, as the aide says, Gadkari holds forth with equal vigour while speaking on cooking as he does on the expressways he has built.

Gadkari, a self-proclaimed foodie, says he started cooking at home during the pandemic.

His YouTube channel began in 2015 but has become more active during the pandemic. It has all his speeches, press conferences, and media bytes garnering thousands of views. Those who like the videos also tag them, bringing more viewership.

Gadkari was invited by international organisations, universities to deliver speeches virtually during the pandemic and all those videos were uploaded on his YouTube channel, the aide says.

In these virtual interactions, Gadkari's approach is to ask people to convert adversity into opportunity, the aide says. Through his numerous webinars, Gadkari has interacted with chambers of commerce, economic forums, students, scientists, entrepreneurs, foreign investors, and Indians abroad.

Two Nagpur-based journalists, Rahul Pande and Sarita Kaushik are bringing out a book titled 'Unmasking India' after going through almost 500 of these webinars. They said the book is a compilation of amazing thoughts articulated by Gadkari on Aatmanirbhar Bharat.

Pande said Gadkari has had online interactions with leading doctors, engineers, policymakers, and secretaries in most state and Central government departments. These people shared their problems with Gadkari, who guided them towards solutions, he said.

The range of topics covered is diverse, from micro, small and medium industry to agriculture, forestry, transport, and green energy.

Gadkari not only interacted with prominent builders or real estate sector players but also reached out to Gadchiroli district tribals who collect honey and tendu leaves for livelihood.

During his online lectures and interactions, Gadkari has spoken of his road map for cluster-driven growth along highways, with equal stress on boosting agriculture and creating value out of farm and forest produce to bring economic prosperity in rural India, Pande says.