H.R. Jayaram is a lawyer-turned agriculturist and the brain behind The Green Path Foundation. 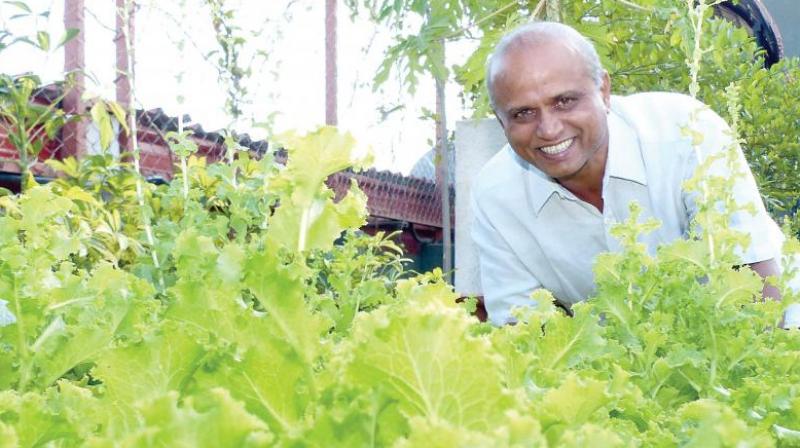 H.R. Jayaram, a lawyer-turned agriculturist, who is the brain behind The Green Path Foundation (Photo: R. Samuel)

Bengaluru: With our farm produce blighted by excessive use of chemical fertilizers and pesticides, the trend of organic farming is gradually catching up, with people trying it out in their kitchen gardens and backyards.

"But this mere backyard practice can bring about a big or real change only if it is made into a movement," observed 58-year-old H.R. Jayaram, a lawyer-turned agriculturist and the brain behind The Green Path Foundation.

The three key initiatives of his foundation include two Eco-stays: Eco-Hotel in Bengaluru, and Eco-Retreat in Coorg, and the Green Path Organic State, situated close to Mantri Square in Malleswaram, the country's largest organic destination for shopping, eating and eco-friendly get-togethers.

Born into a family of agriculturalists in Kanakpura taluk, Jayaram wanted to be a lawyer, but also aspired to own a farm. About his childhood he said he grew up amidst a forest located on the Karnataka and Tamil Nadu border. "It is known as the Veerappan forest and hence this whole agriculture and growing crops was always in my soul," he said.

After years of being a successful lawyer, he invested his savings in buying farm land on the city outskirts. "People generally buy a house, but I was so passionate about farming and my roots that I bought farm land," he said.

He also wanted to take up social causes and has been working relentlessly towards organic food movement for the last two decades. He is the founder secretary for Jaivik Krishi society Bengaluru and treasurer for international competence centre for organic agriculture.

"Bengaluru taught me lessons on how nature has been threatened because of the urbanisation and pollution. Hence, I always look to my farms for peace," he adds. In 1998, he bought Sukrishi farms, a 40-acre barren piece of land, at Nelamangala.

However, now it is a flourishing organic farm with great biodiversity. It has a variety food crops ranging from areca nut, coconut, guava, lime, neem and many other varieties and trees such as silver oak and mahogany. It is also home to many birds and animals. Nearly 15 people work at this farm and many come to study sustainable way to grow crops.

"Innovative practices are implemented here like the use of biogas and rainwater harvesting. The crops here are grown organically using harvested rainwater. It has three man-made lakes which serve for the rainwater harvesting. We follow a multi-crop system and do not use any kind of pesticides or insecticides. We believe that nature has its own way of protecting its creations," he explained.

Jayaram has also adopted scientific processes such as rainwater harvesting, bunding, live fencing along with mulching of farm waste. "This not only enhances the moisture levels of the soil, but produces quality microbes for its natural enrichment," he elaborated.

As for The Green Path Organic state outlet in Malleswaram, he said that it was set up with the sole aim of wanting to attract the mainstream population to organic food and farming, so that it is not restricted to your backyard.

The outlet was built in 2016 and is spread across 25000 sq. ft. It has an Organic store, detox cafe and a restaurant called Forgotten Foods. It is a platform set up to promote good food movement and to revive our traditional recipes and millets in particular. "It hosts a diverse menu, with food cooked with organic vegetables, fruits and ingredients and no refined products used. We use only natural sweeteners, colours and flavours in our dishes," he said.

All ingredients are bought from farmers, who grow it locally and there are fewer chances of leaving behind carbon footprint and it also benefits the farmers