The documentary on all-women INSV Tarini crew will premiere on National Geographic on March 8. 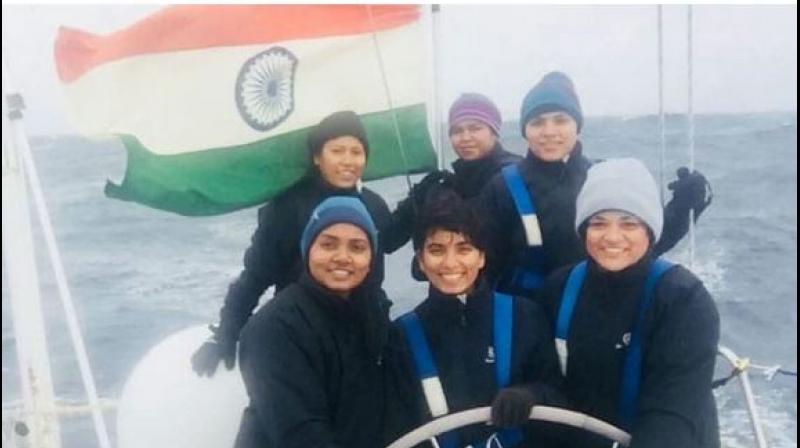 The six women officers had trained under Captain Dilip Donde, the first Indian to circumnavigate the globe solo in 2009-2010. (Photo: @IndianNavy)

New Delhi: After sailing into record books, the inspiring story of 254-day maritime odyssey of six women naval officers, who became the first all-woman Indian crew to circumnavigate the globe, is set to be showcased in a documentary that will premiere on National Geographic on March 8.

The Twitter handle of Indian Navy spokesperson Wednesday shared a trailer of the documentary titled "Tarini" that will air on the channel on International Women's Day.

Witness the historic voyage of 6 brave Indian women naval officers who broke all barriers & stereotypes by circumnavigating the globe aboard #INSVTarini Let’s celebrate these #GirlsWhoSailed &their massive success with @natgeoindia’s documentary @SpokespersonMoD@DefenceMinIndia pic.twitter.com/IvGwODR6PK

The film captures the hardships the crew faced during the mission and showcases their undying spirit and determination, as their accomplishment made the nation proud and became a powerful source of inspiration for the people of the country, the channel said.

The expedition, christened the Navika Sagar Parikrama, was flagged off from the INS Mandovi boat pool in Goa on September 10 in 2017, and the team had returned to Goa last May.

The six women officers had trained under Captain Dilip Donde, the first Indian to circumnavigate the globe solo in 2009-2010.

Indian Navy and National Geographic have joined hands for the documentary that will be released on the channel at 9 pm on March 8 as an International Women's Day special film. It will also be available on Hotstar, a senior official of the network said.

The trailer, also released on the channel showcases some "rare footage from the on-ship cameras that were present throughout the expedition".

"National Geographic is proud to bring the story of a historic mission that not only highlights the courage and grit of the men and women of the Indian Navy, but also showcases how Indian women are breaking societal barriers against all odds," Pawan Soni, Head - Programming and Marketing, National Geographic India, told PTI.

"Over the last few months, we have worked closely with the Tarini crew and officials from Indian naval services to produce a powerful storytelling of the expedition the entire country is proud of," he said.

The documentary will not only give viewers an in-depth view of the mission, but will also help break many "stereotypes revolving around women in society", Soni added.

"It covered 21,600 nautical miles in the Indian-built sailing vessel INSV Tarini that visited five countries and crossed the Equator twice, sailed across four continents and three oceans, and passed south of the three Great Capes - Leeuwin, Horn and Good Hope," a Navy spokesperson had earlier said.

Prime Minister Narendra Modi had congratulated the team on return from their successful expedition.

"Heartiest congratulations to Indian Navys all-women crew of INSV Tarini for completing the Navika Sagar Parikrama, their mission to circumnavigate the globe. Welcome home. The entire nation is proud of you," he had tweeted.

Marking India's 70th Republic Day, National Geographic had earlier joined hands with India Air Force for a special documentary on lesser-known stories of the IAF's operations in the toughest climatic conditions in the country, that was premiered in January.