The young Syrian girl was one of thousands of people evacuated from Aleppo in the last days under a deal brokered by Turkey and Russia. 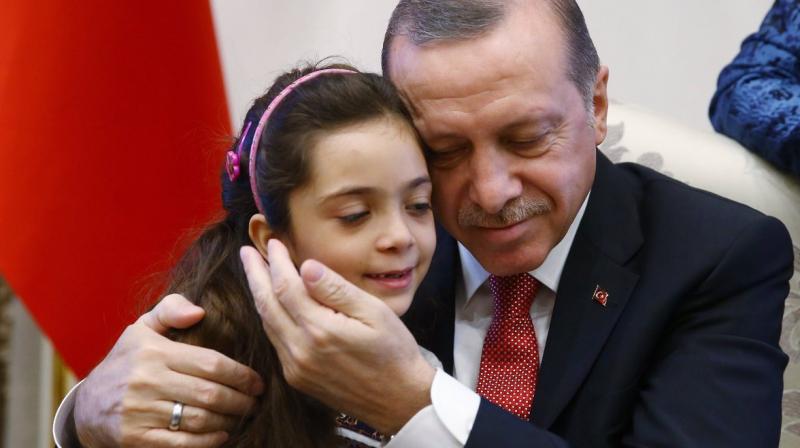 Ankara: Seven-year-old Bana al-Abed, whose Twitter account gave a tragic description of the bombing of Aleppo in Syria, on Wednesday met Turkish President Recep Tayyip Erdogan at his palace in Ankara.

Erdogan received Bana and her family at his palace, the state-run Anadolu agency said, publishing a picture of Erdogan hugging the girl.

A video published by the agency also showed a seated Erdogan holding Bana and an unidentified boy sitting on his knees, flanked by his wife Emine.

The young Syrian girl was one of thousands of people evacuated from once rebel-held areas of Aleppo in the last days under a deal brokered by Turkey and Russia.

She was evacuated on Monday and Turkish officials promised she would come to Turkey with her family. But it was not clear when she had crossed over.

For her 330,000 followers, Bana is a symbol of the tragedy unfolding in Syria, although Syrian President Bashar al-Assad's regime has slammed her and her mother's nearly daily tweets as propaganda.

Turkey is hosting some 2.7 million refugees from the Syria conflict but has made clear it now prefers to look after those recently displaced, who are not injured, on the Syrian side of the border.

However it makes exceptions for special cases and the wounded.