IL&FS has set up a well-equipped fully-computerised operation room for surveillance of vehicles inside the twin tunnels. 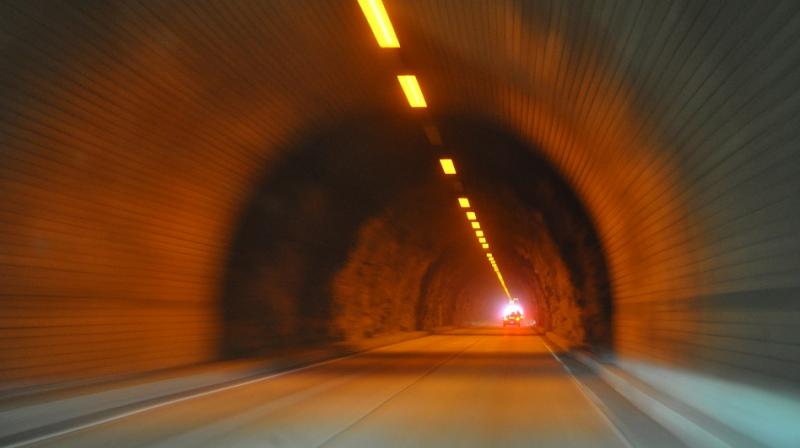 New Delhi: Prime Minister Narendra Modi will dedicate to the nation, Asia's longest bi-directional road tunnel on the Jammu-Srinagar National Highway on April 2, which will cut down travel time between the two by two hours.

The Rs 2,519-crore all-weather tunnel is equipped with world-class safety features and has been built in a record four years on the hilly terrain of Jammu and Kashmir, Road Transport and Highways Minister Nitin Gadkari said at a press meet in New Delhi.

"This state-of-the-art 10.89-km tunnel between Udhampur and Ramban in Jammu and Kashmir, an engineering marvel on the most difficult terrain of the Himalayas, was built in a record four years," the minister said.

Gadkari was accompanied by Minister of State in PMO Jitendra Singh, a parliamentarian from Jammu.

"The project will result in a saving of Rs 27 lakh per day based on traffic estimates and would cut the travel distance between Jammu and Sringar by 41 km," Gadkari said.

He said the tunnel will be equipped with advanced scanners to ward off any security threat. The project forms part of the proposed widening of NH-44 (old NH-1A) from Jammu to Srinagar.

The longest highway tunnel in India also happens to be Asia's longest bi-directional highway tunnel with fully transverse ventilation system, he said. It also comes with

Fitted with intelligent traffic mechanism, the tunnel will have fully automatic smart control and no human intervention will be required for its operations.

The minister added that very few tunnels in the world have fully integrated tunnel control and the Jammu one is fitted with world-class safety features for detection of accidents and fire with a parallel 9-km long escape tunnel.

Elaborating, Gakdari said it will boost economic activity and tourism in the state, adding that it has precluded large-scale deforestation as tree cutting was not required.

The work on the twin-tube tunnel, which is part of a 286-km-long four-lane project on the highway, had started on May 23, 2011, in the lower Himalayan mountain range.

The tunnel is located at an elevation of 1,200 metres.

Constructed by IL&FS, the tunnel is all set to be handed over to National Highway Authority of India (NHAI) soon after its formal inauguration by the Prime Minister.

Once the tunnel becomes operational, it will reduce traffic jams on National Highway-1A caused by snowfall and avalanches in winter at Patnitop, he said.

Travel will cost an LMV vehicle Rs 55 for one side and Rs 85 for to-and-fro journey and Rs 1,870 for one-month travel.

Bigger vehicles like mini buses will have to pay Rs 90 as one side toll and Rs 135 for both sides.

Buses and trucks will have to shell out Rs 190 as one-side trip and Rs 285 for a two-way journey.

Rathore said Infrastructure Leasing and Financial Services (IL&FS) has set up a well-equipped fully-computerised operation room for surveillance of vehicles inside the twin tubes.