The film is being directed by Abhishek Sharma, and it is releasing on 20th September 2019. 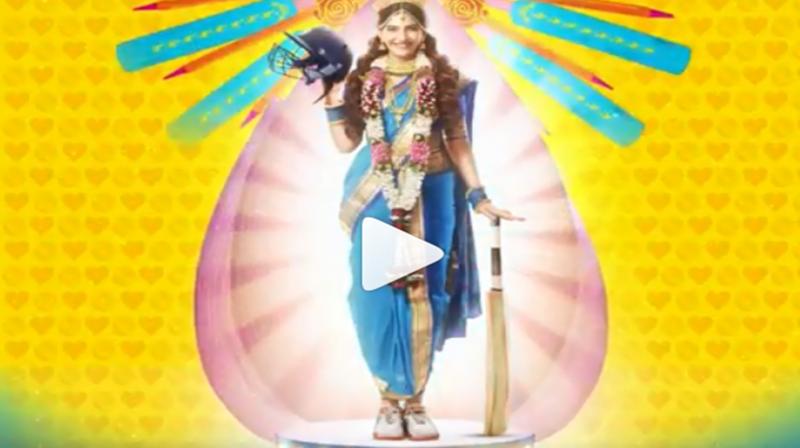 Mumbai: After creating a lot of buzz around revealing India's lucky charm, Dulquer Salmaan took to his social media to unveil the lucky charm of India- none other than Zoya Solanki from the upcoming film ‘The Zoya Factor’ which stars Sonam Kapoor and Dulquer Salmaan.

Sonam Kapoor has donned the goddess avatar holding cricket bat and helmet with her bright wide smile in the poster. Dulquer Salmaan introduces the lucky charm of India as he took to his social media where he wrote, "And here she is! The lucky charm of India, Zoya Solanki. She is winning hearts everywhere with #TheZoyaFactor, let’s see if she can win mine! @sonamakapoor #AbhishekSharma @Pooja_Shetty @aartims @foxstarhindi @ad_labsfilms"

And here she is! The lucky charm of India, Zoya Solanki. She is winning hearts everywhere with #TheZoyaFactor, let’s see if she can win mine! @sonamkapoor #AbhishekSharma @pooja__shetty @aartishetty @foxstarhindi @ad_labsfilms

Zoya Factor is about a Rajput girl named Zoya Singh Solanki who meets the Indian Cricket Team through her job as an executive in an advertising agency and ends up becoming a lucky charm for the team in the 2011 Cricket World Cup. Eventually, Zoya falls for skipper Nikhil Khoda who doesn't believe in luck and superstitions.

‘The Zoya Factor’ is an unusual story about an advertising agent becoming a lucky charm for the Indian cricket team when she chances upon meeting the captain of the team and how it starts raining luck ever since then!

The film is being directed by Abhishek Sharma, and Fox Star Hindi is producing it. The film is slated to release on 20th September 2019.