Born to Jayantibai and Janardhan in present-day Mumbai, she was married off when she was 11 to Dadaji Bhikaji. 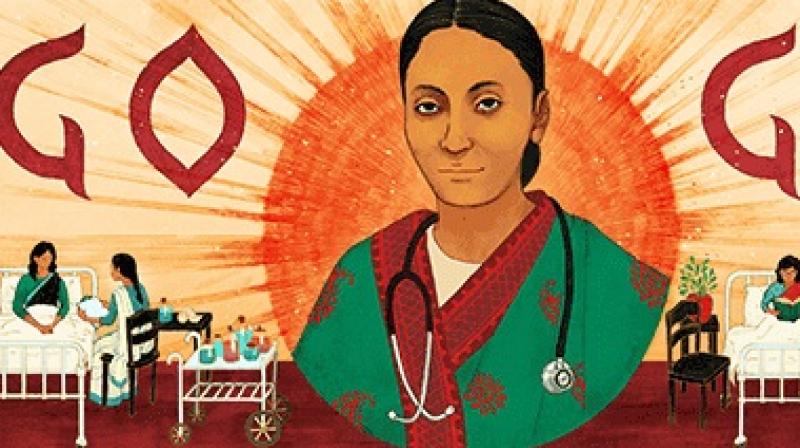 She enrolled in the London School of Medicine and qualified as a doctor in 1894 (Photo: Google)

Rukhmabai, who was born in 1864 and lost her father at a tender age, is hailed as a pioneer in the field of medicine and women's rights in the 19th century, an era of curtailed freedom for women.

Born to Jayantibai and Janardhan in present-day Mumbai, she was married off when she was 11 to Dadaji Bhikaji, 19, after her father's demise.

"When Rukhmabai was still in school, her husband, Dadaji, insisted that she come and live with him in his house. Rakhmabai, not one to blindly follow convention, refused," according to the information curated by Google alongside the doodle.

Dadaji soon moved court for a case that would span four years. Although the case went in Rukhmabai's favour, an appeal went in Dadaji's favour.

The case also caught media's attention bringing to fore significant issues of child marriage and women rights. It was instrumental in the drafting of the Age of Consent Act in 1891.

In the run up to the trial, Rukhmabai wrote several articles, under the pseudonym 'A Hindu Lady', which were published in newspapers and even discussed internationally for highlighting the pressing issues of the time under colonial rule in India.

"This wicked practice of child marriage has destroyed the happiness of my life. It comes between me and the things which I prize above all others study and mental cultivation. Without the least fault of mine I am doomed to seclusion; every aspiration of mine to rise above my ignorant sisters is looked down upon with suspicion and is interpreted in the most uncharitable manner," she wrote in one of her letters.

After the case, as records state, Rukhmabai decided to pursue medicine study and went to the UK on sponsorship.

In the UK, she enrolled in the London School of Medicine and qualified as a doctor in 1894. She then returned to India and worked as the medical officer for women in Surat for 22 years and then in Rajkot for 12 years.

Hailed as a pioneer in the field of medicine and women's rights in pre-independence India, Rukhmabai passed away at a ripe age of 91 in 1955.