Greta Thunberg along with hundreds of students march in Paris for climate action. 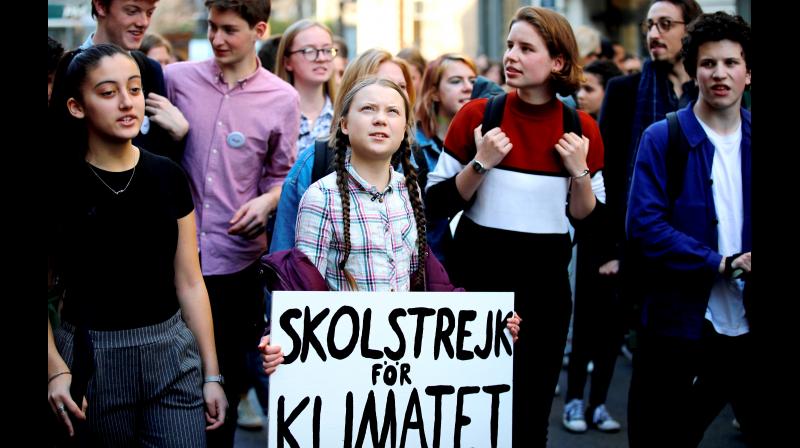 Swedish teenager Greta Thunberg (centre), carrying a sign that reads: "school strike for the climate", leads a march of thousands of French students through Paris on Friday. (Photo:AP)

Paris: Hundreds of French students have taken to the streets of Paris to call for more action to fight climate change, one day after a similar march in Brussels. Greta Thunberg, the 16-year-old Swedish schoolgirl who is being hailed as her generation's voice on climate change, joined the Paris march Friday.

Greta Thunberg, being regarded as a climate campaign star, has successfully been able to inspire the youth in Europe, especially France, Belgium and Germany, to speak up about climate change. She marched to the Elysee Palace to meet French President Emmanuel Macron after joining thousands of people at a demonstration in Paris recently.

Thunberg’s simple act of skipping lessons every Friday to protest over global warming outside the Swedish parliament have now translated into mass movements, which primarily consist of students.

Young protesters marched in a joyful atmosphere chanting slogans about global warming like "1, 2, 3 degrees, it's a crime against humanity." Morgane De Walst, 21, said, "We defend our world, we defend our future and the system and the world we would like to live in."

Another participant of the march, 22-year-old Thomas Mulliez, added, "We continue polluting, big companies discharge junk in our atmosphere, and we are aware of the Arctic melt. So something must be done."