Dhamija’s whodunit looks into Indian judicial process and lays bare fact that because one is not guilty, does not mean they are innocent. 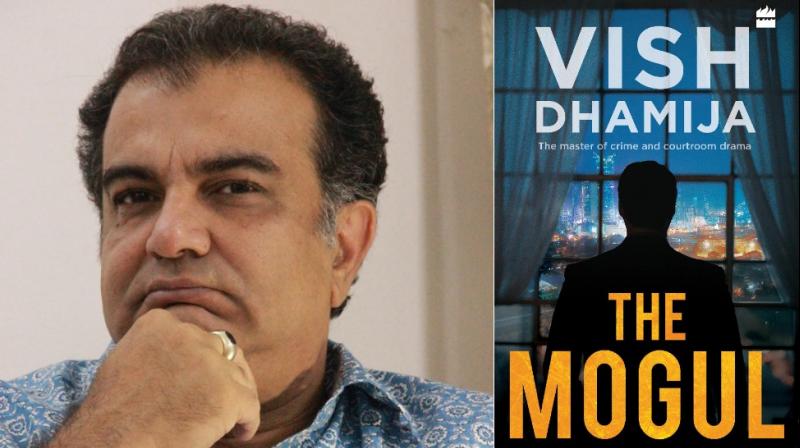 Dhamija’s The Mogul revolves around Prem Bedi, who, at 53, and hailing from a royal family has always had the spotlights on him. A twist of fate and some morbid turn of events finds the man under the spotlight, albeit, for a very sinister reason.

The third richest man in the country, a business tycoon is accused of killing his ex-wife and her husband and is dragged into a highly publicised court battle…

Often called 'India's John Grisham', Vish Dhamija, the author of six bestselling crime fiction is all geared up to come out with his latest offing, The Mogul.

His latest thriller is a whodunit that takes a sneak peek into the Indian judicial process and goes on to lay bare the fact that just because one is not guilty, does not necessarily mean that they are innocent.

Dhamija’s The Mogul revolves around Prem Bedi, who, at 53, and hailing from a royal family has always had the spotlights on him. A twist of fate and some morbid turn of events finds the man under the spotlight, albeit, for a very sinister reason.

In conversation with this correspondent, the bestselling crime author says that one of the biggest draws of The Mogul is the fact that it is a legal thriller, a genre that is by far not much touched upon by writers outside the US.

The author also adds that unlike a straightforward whodunit, The Mogul is “more a courtroom drama and how the evidence is played with.”

“One aspect that is totally unique about The Mogul,” Dhamija reveals, “is the narrative.”

According to the author, the narrative unfolds through the perspectives of the ensemble characters and while the lenses change, the story progresses without losing focus.

“The only character who doesn’t have a voice in the narrative is the protagonist—The Mogul himself,” Dhamija reveals.

Elaborating upon his inspiration behind The Mogul, Dhamija opines that the idea came from the numerous legal fiction and legal cases he has read.

Dhamija says that a case he read a while back was what had initially given him the idea to pen the novel – the idea of exploring a little gap in the legal system, which existed till recently.

“I thought if I didn’t date the story (since this cannot happen today—the legal bodies across the globe have corrected the mistake now) it was worth fictionalising. I have referred to the case in the book to give readers a chance to explore it further should they want to.”

“The characterisation, the story is entirely fiction though,” he underlines.

While there may be authors like John Grisham, Michael Connelly, Scott Turrow or a Jodi Picoult out in the West, writing scathing legal fictions, India, as a whole, has not seen much development in the genre, save for a lone Dhamija, or an occasional work by any other author.

Dhamija, however, feels that the notion is not entirely correct. While there might not have been a lot of Indian authors writing on the genre while he was growing up, the scenario has seen a shift since then.

Looking at the novel, Dhamija’s protagonist Bedi’s every movement is being watched and reported and amidst all this, a young rookie defence advocate wants the case as defending the tycoon would mean he’s made it in life. The prosecuting advocate on the other hand, wants to bury the tycoon to make headlines.

To intertwine fiction with intricacies of legality is no mean feat.

The author adds that he is ‘lucky’ to have been a law-dropout, so although he does not have a degree he has the knowledge of how it works.

“I have been to courtrooms several times, and also have friends who are lawyers, so I can pick up the phone and consult. If you provide reference cases they have to be on the spot. But research is an essential part of writing even if it’s not legal. One needs to understand the police procedures if one wrote in that genre.”

“Lack of research in any book would render the book frivolous at best,” he opines.

Published by Harper Collins India, while Dhamija’s The Mogul is all set for release on July 25, the author is already working on two other books which are supposed to come out next year.

Dhamija reveals that one is a crime caper about an art theft in New Delhi, where the protagonist doesn’t realise that stealing is one thing, getting away with a multi-million dollar painting is something entirely different. The second one is the third installment in the hugely successful DCP Rita Ferreira (Bhendi Bazaar, Doosra) series.