She aims to get the best of vaccine to market and even push them into state immunisation programmes. 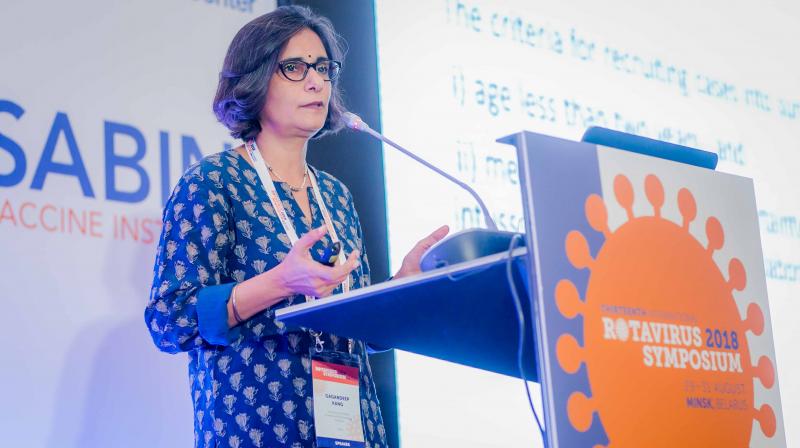 She has pioneered work on safe and effective rotavirus vaccines that are now being used to prevent disease in Indian children and which will soon be used in vaccination programmes around the world. (Photo: Dr Gagandeep Kang)

And when she speaks in detail about damaged Indian guts’ response to oral vaccines, they listen in rapt attention.

“I over-prepare for meetings,” Dr Kang tells us with a laugh. She makes sure she has read up everything on her subject -- enteric infections, nutrition and the prevention of enteric infections through vaccinations. That makes her an “informed expert” in this very male-dominated bastion. “Over time, people recognise that you add value and they listen more,” she adds.

Known as India’s ‘vaccine godmother’, Dr Gagandeep Kang has smashed the glass ceiling with her work. She is the first Indian woman to be elected a Fellow of the Royal Society (FRS) in the United Kingdom and the Commonwealth in its 360 years of history.

Latching on to medicine from early in life was easy. She loved maths and biology and had a family full of doctors. Dr Kang’s favourite choice was how to make the body protect itself, or vaccination.

She aims to get the best of vaccine to market and even push them into state immunisation programmes.

“The work we have done explains how Indian guts are damaged and what the consequences of this damage are for nutrition and oral vaccination. This is significant to understanding issues of public health in our country and other developing nations,” she says.

The research explains constant exposure to a poor environment which leads to repeated infections and inflammation in Indian children. This damages the gut and results in malnutrition and poor response to vaccines, she says.

She has pioneered work on safe and effective rotavirus vaccines that are now being used to prevent disease in Indian children and which will soon be used in vaccination programmes around the world.

But nothing has prepared her for the FRS! “I always thought FRS feted brilliant minds like Netwon and Stephen Hawking who conceive theoretical explanations for natural phenomena which are then tested by them and others. My work was more focused on solving public health problems. I never considered myself in their league as an original thinker,” she says.

Dr Kang promotes and stands up for science – just like the FRS that encourages excellence of science and scientific ideas.

“I want to ignite curiosity in young people and make them feel the magic of discovering answers to their own questions,” she says.

Particularly women. Acknowledging that social stigma often leaves a woman behind, she tells us why she over-prepares. “I have to make people listen. If I were a man, the intensity of that effort would have been low,” she says.

Dr Kang feels she has adequately balanced work and home though her family might think otherwise. “But I do my best,” she adds.

She is blessed to have to great friends in India and abroad. “We go on holidays every few years,” she signs off.