Clara Daly, 15, has become online sensation after helping a deaf and blind man. 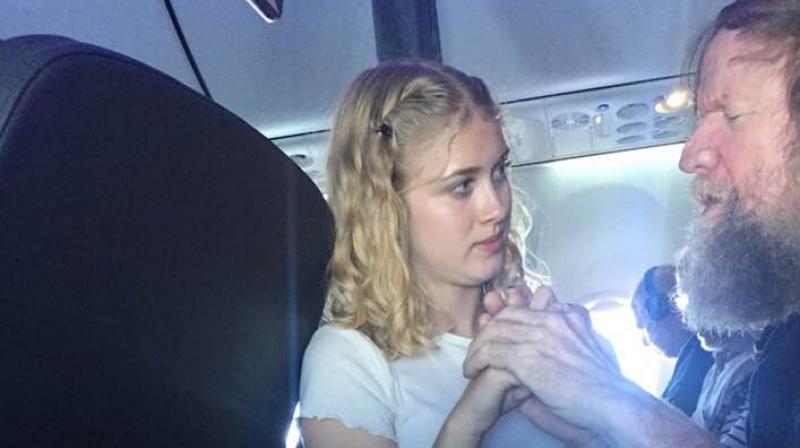 Boston: A teenager is being credited with coming to the aid of a blind and deaf man during a flight from Boston to Portland, Oregon.

Clara Daly, of Calabasas, California, says she and her mother were travelling last week when the flight attendants asked if anyone knew American Sign Language.

The 15-year-old had been taking sign language classes for a year and volunteered to help. That's when she met 64-year-old Tim Cook, who was traveling alone and struggling to communicate.

Speaking to CBS Los Angeles, the youngster said that she saw sign language as a way to communicate without having to read and write.

Clara didn't hesitate to volunteer when a flight attendant asked if anyone on the plane knew American Sign Language.

While the flight crew did their best to ensure Cook was comfortable and well looked after, they struggled to communicate with him.

That's when the teen stepped up to help.

A fellow passenger captured a photo of Clara signing into Cook's hand and posted it to Facebook Sunday. The post has since received more than 1 million likes.

Cook tells KGW-TV he was "very moved" that Clara came and helped him. Clara says their chance encounter was "meant to be."

The 15-year-old girl who comforted a blind and deaf man on a flight with sign language has spoken out about the moment that warmed hearts across the nation.

Pictures of Clara Daly signing into the hand of Tim Cook on their Alaska Airlines flight from Boston to Portland last week quickly went viral.

And while many - including Cook himself - have called Clara an angel, the Los Angeles teen revealed she was nervous she was going to say something wrong.