Batra also said the attitude of the current government is right with respect to the steps taken by it. 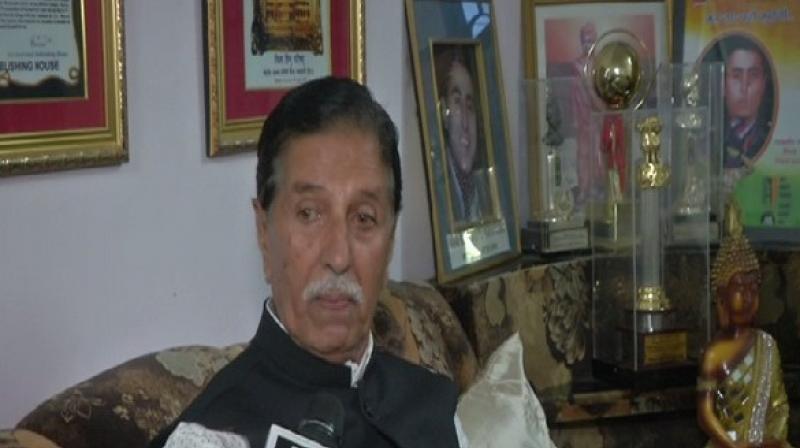 Twenty years after he lost his son in the Kargil war, late Captain Vikram Batra's father has just one request - to name roads in Delhi after Param Vir Chakra awardees. (Photo: ANI)

Palampur: Twenty years after he lost his son in the Kargil war, late Captain Vikram Batra's father has just one request - to name roads in Delhi after Param Vir Chakra awardees.

GL Batra, the father of Captain Vikram Batra, who laid down his life in 1999 while fighting Pakistan, said he is yet to hear back from the Delhi government on his request.

"I do not have any demands with respect to the martyrdom of my son Vikram Batra. But I have requested Delhi government to rename roads in Delhi after Param Vir Chakra awardees. However, I am yet to receive a response on it," said Batra, whose son was posthumously conferred with the Param Vir Chakra - the highest military decoration awarded for wartime valour.

Batra also said the attitude of the current government is right with respect to the steps taken by it.

"Twenty years have passed since the Kargil war, but relations with Pakistan remain tense. Pakistan has not stopped infiltration and terrorism. The attitude of the present government is right with respect to steps taken by it like Balakot airstrike and surgical strike. If Pakistan continues with militancy then this attitude should be maintained," he opined.

"India is a strong country and it should let Pakistan know that it can ward off any threat and respond to it. I think we need to take strict action against Pakistan because it has continued with terrorism," he added.

Meanwhile, parents of Captain Saurabh Kalia, who was held as a prisoner of war by the Pakistan Army, also paid tributes to the fallen soldiers on Kargil Vijay Diwas.

Captain Kalia and five others were kept in captivity where they were tortured and killed in 1999.

Saurabh's father NK Kalia said, "I pay tribute to all the martyrs who brought glory to our nation. I express gratitude to soldiers who do service in extreme conditions."

On being asked about changes in the last 20 years, he said, "Narendra Modi government carried out the surgical strikes and Balakot airstrike and pressurised Pakistan to release Wing Commander Abhinandan Varthaman. Recently, there were positive developments in Kulbhushan Jadhav case. So this forms a new image of India."

"I wish similar action was taken when my son and his five colleagues were brutally killed by Pakistani soldiers," he added.

On legal battle to give justice for Saurabh Kalia, he said, "Our case is not enlisted. I have appealed to counsel to enlist the case and hearing, in this case, should take place. This is a matter between India and Pakistan, so the role of the Ministry of External Affairs (MEA) is greater than the judiciary. If MEA wants then it can take up this issue with Pakistan and at an international level."

Meanwhile, Saurabh's mother said, "I pay tributes to martyrs and salute those soldiers who fight for our country in difficult circumstances. After 20 years of Kargil war, our demand for justice is still not met. Our legal battle also remains where it was. Our political leaders were busy bashing each other. But they should not blame army personnel."

N K Kalia had moved the Supreme Court in 2014 to 'fight for the dignity and honour of armed forces.'