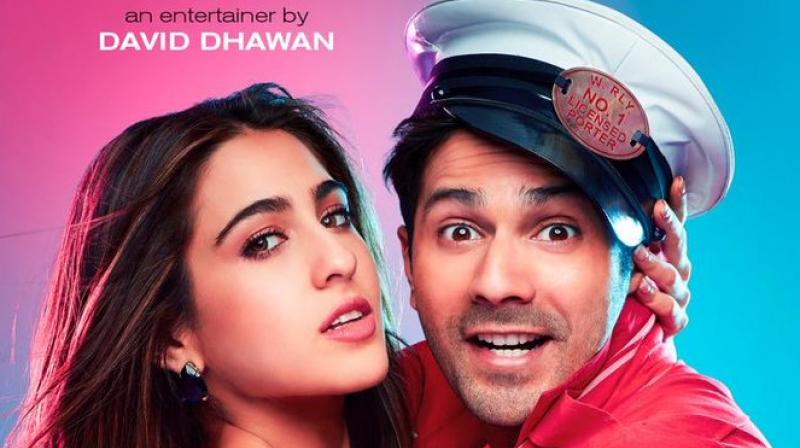 New Delhi: Bollywood powerhouse Varun Dhawan, who is prepping for his next outing 'Coolie No. 1', also featuring Sara Ali Khan, accused his co-star of copying the colour of his outfit.

The 'Badlapur' actor recently shared a picture on Instagram with Sara and famed choreographer Ganesh Acharya while doing 'namaste' as they posed for the camera.

The trio appears to be rehearsing for a dance number for the upcoming movie. While both Varun and Sara are seen twinning in yellow t-shirts and black lowers, the 'Kalank' actor has accused Sara of copying him and sporting the same colour as him.

"MASTERJI @ganeshacharyaa, who choreographed is and OG of coolie @saraalikhan95 #coolieno1," he captioned the post. He added in Hindi, "Saraji ne mere vastra ke rang ko copy kiya," (Sara has copied the colour of my clothes).

Varun, who stays quite active on the photo-sharing application, is known for his sense of humour and witty responses. He had earlier shared his first look from the flick with the caption, "COOLIE NO 1. May1st 2020. Haat jao baju aya Raju."

Other than Varun and Sara, the film also stars Paresh Rawal, Rajpal Yadav, Johnny Lever and Jaaved Jaaferi in pivotal roles. The cast began filming in Bangkok, Thailand on 7 August. Writer Farhad Samji had shared the news in an Instagram post.

The original film which starred Govinda and Karisma Kapoor in the lead was directed by David. Varun's father will also direct the upcoming film, which will be produced by Vashu Bhagnani, who also bankrolled the 1995 classic.

This will be the third collaboration between David and Varun after the 2014 movie 'Main Tera Hero' and the 2017 hit film 'Judwaa 2'. Varun is teaming up with Sara for the first time in the 'Coolie No.1' remake. The film will hit the screens on May 1, next year.

Apart from this film, Varun will also be seen in Remo D'Souza's upcoming dance film 'Street Dancer'. The movie features Shraddha Kapoor as the female lead and Nora Fatehi and Aparshakti Khurana in pivotal roles. 'Street Dancer' will release in January 2020.

Sara will be starring in Imtiaz Ali's next alongside Kartik Aaryan. It is scheduled to hit the big screens on Valentine's Day next year.