Out on a limb: Vanity Fair's curious cover

The magazine forgot to erase an extra leg they gave Reese Witherspoon. 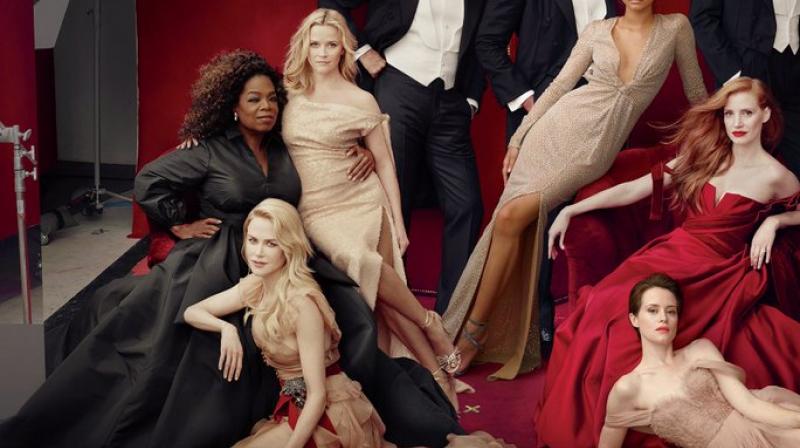 The latest cover of prestigious US magazine Vanity Fair features an annual photograph of Hollywood's elite -- with a twist.

Reese Witherspoon, Oprah Winfrey, Tom Hanks, Robert de Niro, Nicole Kidman and other stars are grouped for the magazine's "Hollywood Issue" in a photo lavishly retouched -- but forgetting, it seems, to erase an extra leg.

Well...I guess everybody knows now...I have 3 legs. I hope you can still accept me for who I am. 😃( and I will never apologize for snuggling @Oprah .. if you get the opportunity, I highly recommend it;) https://t.co/6GyrfWxNSY

"I hope you can still accept me for who I am."

After Witherspoon's tweet, Winfrey -- the queen of American television -- raised her hand to comment on another picture taken for the issue by acclaimed photographer Annie Leibovitz.

"I accept your 3d leg. As I know you accept my 3d hand," Winfrey joked.

She was referring to a separate photograph from the shoot, one in which Winfrey indeed seems to have three hands: one at her waist, one around Witherspoon, and a third resting on her own leg.

That picture has now been removed from Vanity Fair's website.

The photographs caused amusement on the internet Friday, and Vanity Fair played along.

"While we would have loved the exclusive on @RWitherspoon's three legs, unfortunately it's just the lining of her dress," the magazine tweeted.

While we would have loved the exclusive on @RWitherspoon's three legs, unfortunately it's just the lining of her dress. https://t.co/HJjvbc037S

As for Winfrey -- a producer, presenter and actress -- "how can we expect her to juggle it all with just two hands?" Vanity Fair joked, noting that the error was being corrected online.

Actor James Franco was also meant to be part of the Vanity Fair spread but was scrubbed because of "the misconduct allegations against him," The Hollywood Reporter said, citing a Vanity Fair source.

He was reportedly accused by five women of sexually inappropriate behavior after he won a Golden Globe this month for best actor in "The Disaster Artist".

Franco sat for the Vanity Fair photo shoot but was then digitally removed from the cover following the allegations, The Hollywood Reporter said, citing multiple sources.