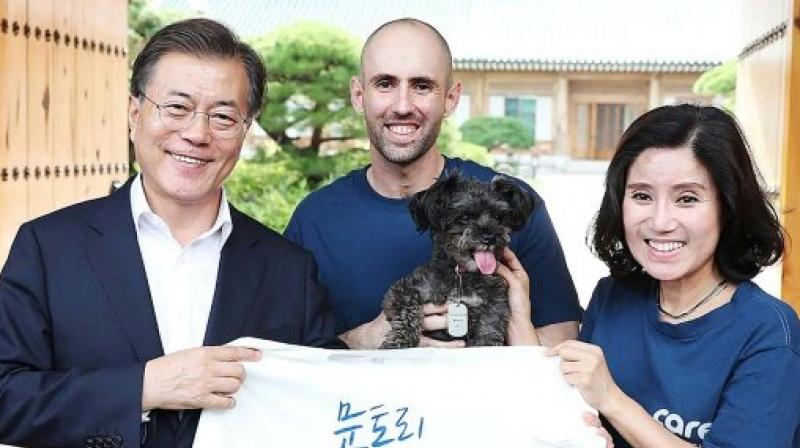 Seoul: South Korean President Moon Jae-In has welcomed a new member into his family: Tory, a black mutt who was reportedly headed for the dinner table before being rescued two years ago.

The pooch's previous owner was an old man notorious for abusing dogs and eating them, according to CARE, the animal rights group responsible for rescuing Tory.

Moon, an animal lover who had pledged to adopt Tory during his presidential campaign, welcomed the animal home on Wednesday, his office said in a statement, adding that it was the first time a rescued dog had made its way to the presidential Blue House.

The adoption comes after Moon's ousted predecessor, Park Geun-Hye, came under fire for abandoning her nine canine companions when she left the Blue House in disgrace earlier this year.

"Moon Tory, in the arms of its father! Tory, please live a happy life!" said a user on Twitter.

"Tory, you have met the best owner!" tweeted another user.

A small black and grey mongrel with upright ears and sparkling brown eyes, Tory had been beaten and was found tied to a rope at an abandoned farmhouse outside Seoul, Moon's office said.

His former owner had earlier stabbed another dog to death, according to an eyewitness who alerted CARE, the animal rights group said.

Moon visited the animal shelter where Tory was housed in May and vowed to adopt the "so-called ugly dog... on the grounds that all humans and animals hold the right to be free from prejudice and discrimination".

Moon's adoption of the mutt, believed to be around four years old, is unusual because most South Koreans prefer to own purebred dogs.

Dogs deemed "ugly" are often abandoned and rights groups estimate that some 100,000 pooches are deserted by their owners each year, with many ending up at canine meat farms or euthanised.