The Father Review: A beautiful portrayal of the heartbreaking helplessness of old age 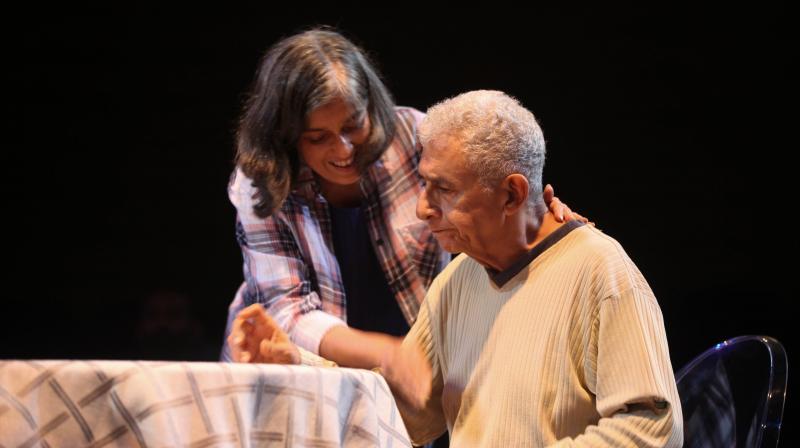 A scene from Naseeruddin Shah's The Father.

Walking into NCPA's Experimental Theatre for Naseeruddin Shah's The Father all I see is a minimalist stage and a few pieces of furniture. Rooms and doors have been marked with tape on the ground, like those we see in blueprints. I will later realise that this was a very brilliant and clever set designed by Arghya Lahiri, Anuradha Parekh Benegal and Ratna Pathak Shah.

It feels different already; as the first act ensues you think you know what's happening.

Andre (Naseeruddin Shah's) is old and wishes to live in his apartment without any carers. He seems confused when his daughter Anne (Heeba Shah) says that she is planning on moving to London to be with her lover, and that he is making it hard for her to leave -- especially now that his latest carer Isabel, has accused him of physically abusing her (which he denies). He doesn't understand why his daughter is mad at him when it all just seems like a simple misunderstanding.

Scene two is when I realise there was more to the introductory scene than meets the eye. Andre is trying to call his lawyer (or his daughter) when suddenly a man who calls himself Pierre (Saahil Vaid) enters the apartment.

A perplexed Andre (and audience) wants to know who this is. Pierre introduces him as Anne's husband of five years. 'But wasn't Anne going to go to London?'

However it seems this information is foreign to Pierre, and that's when Anne (Bhavna Pani) comes home from the market.

Pierre doesn't recognise her, neither does the audience.

This is when the feeling of unease sets in, is this Anne real, or was it the first one?

It is here that the director has wonderfully woven in the entire crux of the play and you just begin to realise, maybe the director is suggesting that Andre may have dementia.

And that's where the beauty of the play lies.

Andre struggles in the most basic aspects his daily life, you feel his struggles, you experience just a tiny bit of what it must be like to not remember things that are so essential.

You feel his helplessness when Anne doesn't trust him to be capable enough to take care of himself.

In one scene when Anne (Heeba Shah) talks to Pierre (Faisal Rashid) about Andre's days as a policeman, she says, "I used to be afraid of him you know? And now I sang him a lullaby and put him to sleep, his mouth open, so peaceful, like a child". It makes you truly feel what Andre must have felt -- to have become a shell of a man he once was.

Shah essays the role of Anne with panache. She is strong yet sensitive and holds her own despite Andre not appreciating her efforts. Always asking about Eloise, he seems almost cruel to Anne, complaining to his carer Laura (Trishla Patel), "She never touches alcohol. That’s why she’s so sober."

Naseeruddin Shah takes us on a ride with his acting. The audience feels his anger, confusion, pain and when he laughs you just want to chime in. His anguish over losing control makes you feel just as helpless, leaving you in tears.

When Andre sees faces or hears information he seems to have never been exposed to, he reassures others (although it seems more for him), and that he is well aware of everything that is happening.

While it seems Andre's relationship with Anne is very strained, in times of need, he looks just for her; she is his constant, the only reality he can trust.

Naseeruddin Shah's Motley Theatre Group has done complete justice to Florian Zeller’s brilliant play Le Pere, translated to English by Christopher Hampton. The changes in the set and the progression of the script take the audience on a journey of the mind’s slow progression into the land of oblivion -- dementia.

The set often changes, with pieces of furniture being added or taken away, allowing us to experience Andre's scattered thoughts and memories. The stage execution, carried out by Jairaj Patil and his crew, takes mere seconds to move around when the lights go out.

The sound design by Saahil Vaid is amazing, with the sound effects being timed so perfectly that I was waiting for a glitch, but there were none. The light design by Arghya Lahiri is clever and highlights the changes in mood, time of day and the plot progression onstage.

The Father will run in NCPA till September 30, and then have its November run in Prithvi Theatre from November to December.