In a wheelchair since birth, she had struggled for years to make it as a model in Ukraine where disabled people often get left behind. 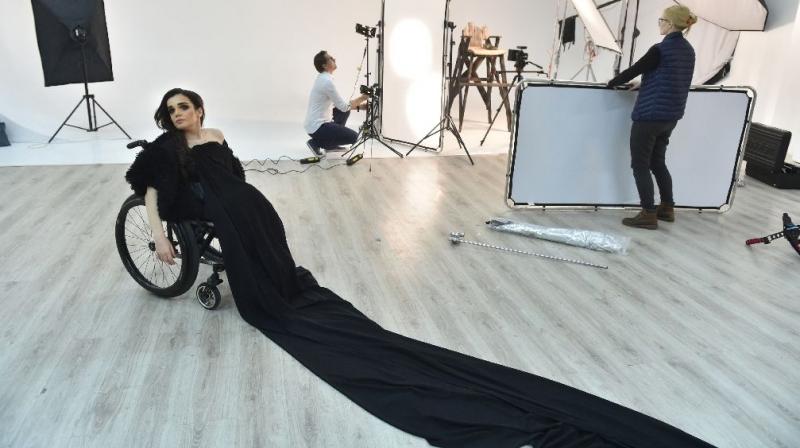 Kiev: When Alexandra Kutas headlined a recent fashion show in Kiev it was not just a personal dream come true but also a victory for disabled people in her homeland Ukraine.

Wearing a long, black dress, she wowed the crowd as she was carried across the catwalk on a wooden throne by four trim men, becoming the first model with a disability to take the lead in a high-profile event in the country.

"I had the idea that I wanted to do a catwalk and show that a girl in a wheelchair can be perceived as a first-class professional", she said.

For 23-year-old Kutas, it was the latest stage in a long journey.

In a wheelchair since birth due to cerebral palsy, she had struggled for years to make it as a model in the ex-Soviet state where disabled people all too often get left behind.

Kutas sent letters to modelling agencies - but the response was always the same polite refusals.

"They told me that I am very pretty, but they do not know how to promote me because the market is still not ready for this", says Kutas.

Kutas was born in Dnipro city, in the east of Ukraine, and went to an ordinary school. It was a bold step to take in 2000, when inclusive education was rare.

There were no ramps or elevators for special needs children in schools, so Kutas's father or grandfather had to carry her up the stairs so that she could study with the other children.

"Yes, it was difficult, but it is generally difficult to be a person with limited physical mobility in our country. Everyone knows that," Kutas says.

In 2012, Kutas was having lunch in a cafe when a photographer approached her and asked if she wanted to become a model.

She agreed and loved the process of having her picture taken so much that she soon began looking for other photographers to work with.

"When I realised that I wanted to do this, there did not seem to be a single model with a disability in the world", Kutas says, recalling how she conducted a search for role models to follow and found none.

And then she suddenly came across a 1999 show of Alexander McQueen, the late British designer, where Aimee Mullins, a world-class Paralympic athlete, modelled in his statuesque and beautiful prosthetic legs.

"It was a huge stimulus for me, a huge inspiration. I wondered why, if it was possible back then, in 1999, why it could not be possible now for a girl in the wheelchair?"

When the Italian house FTL Moda invited models with disabilities to participate in New York Fashion Week recently, Kutas felt that the world was finally ready for a change.

Fedir Vozianov, a 55-year-old Ukrainian designer, never expected the domestic market to be ready for such a dramatic change.

But when he met Kutas and saw her confidence, Vozianov says he understood that he, himself, was willing to give it a go.

"People are not all the same - we are all different in this world", Vozianov says.

"It would be strange to cut a part of this world off at the podium."

Today Kutas is not only a rising model, but also an adviser to the mayor in her native city.

She helps to adapt the city to the needs of disabled people, which is especially important due to the conflict between government forces and Russian-backed separatists in Ukraine's east that has claimed more than 10,000 lives and wounded 23,000 people.

"I know that now is the moment that Ukraine simply cannot miss," she says.

"It is always possible to grow, to evolve, to do something. The main thing is to create the conditions for these people whose great potential is hidden".