This is the first visit of either a head of state or head of government from India to all the three countries, the MEA said. 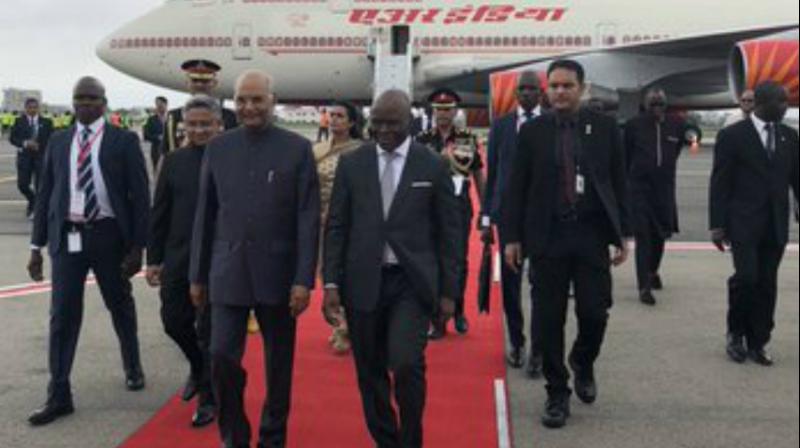 Cotonou: President Ram Nath Kovind on Sunday arrived here in Benin on the first leg of his three nations' tour to the West African region, the first visit by an Indian head of state to the country.

Kovind arrived at the Cardinal Bernadine de Cotonou International Airport in Cotonou, the largest city in the West African country.

Kovind will hold talks with his Beninese counterpart Patrice Talon on Monday.

The President will then travel to Porto Novo, the seat of Beninese Parliament, and in a special honour extended to India by Benin, he will address the National Assembly there.

He will also meet the members of the Indian community at a reception hosted in his honour in Cotonou on July 30 before departing for The Gambia, the MEA said in a statement in New Delhi on Thursday.

Apart from Benin and The Gambia, he will also visit Guinea, the first visit by an Indian head of state to the three West African countries, the MEA said in New Delhi on Thursday.

The visit, from July 28 to August 3, is expected to reinvigorate and give new direction to India's ties with the three countries, Secretary (East) MEA Vijay Thakur Singh said.

This is the first visit of either a head of state or head of government from India to all the three countries, the MEA said.

Various MoUs and agreements will be signed during Kovind's visit to the three west African countries, Singh said.

President Kovind has visited 20 countries in his tenure till now and after this visit, the number will be 23, Press Secretary to the President Ashok Malik said.

The president's visit to Benin, The Gambia and Guinea will be his fourth visit to the African continent. The visit of the president will further deepen India's relations with the African nations, the statement said. ​