The award is for women who have shown courage and leadership while advocating for peace, justice and human rights. 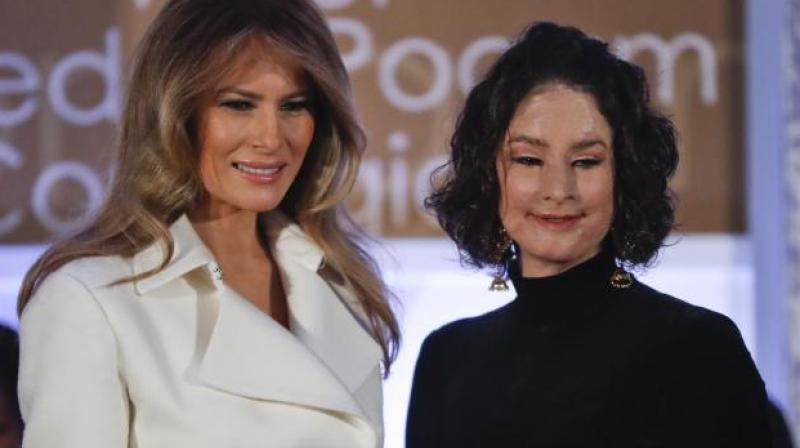 Washington: Melania Trump helped present State Department awards on Wednesday to 13 women from around the globe who were recognized for demonstrating courage and leadership in the face of adversity, a group she praised as "true heroes."

The first lady, on her first visit to a Cabinet department, joined Thomas Shannon, undersecretary of state for political affairs, to present the Secretary of State's International Women of Courage Award. Secretary of State Rex Tillerson was travelling to Turkey.

The award is given to women around the world who have shown courage and leadership while advocating for peace, justice, human rights, gender equality and women's empowerment - often at personal risk.

One of the honourees, Natalia Ponce de Leon, of Colombia, started a foundation to defend and protect the human rights of victims of acid attacks after a stalker doused her face and body with sulfuric acid in March 2014.

Another woman, Malebogo Molefhe, of Botswana, became an advocate for female victims of gender-based violence after she was attacked, including being shot eight times, by an ex-boyfriend in 2009. She uses a wheelchair due to injuries suffered during the assault.

During brief remarks, Mrs. Trump asked the audience to imagine being any of the 13 women on stage with her.

"Ask yourself if you would have the fortitude of spirit, the courage of your convictions and the enormous inner strength required to stand up and fight against such overwhelming odds," she said. "Amazingly, each of our honourees has courageously answered 'Yes' to those questions."

"These honourees, who have fought on the front lines against injustice, are true heroes," she continued, adding that their bravery is a reminder that "there is always hope whenever the human spirit is brought to bear in the service of others."

More than 100 women from more than 60 countries have been recognized with courage awards since 2007, the department said. Mrs. Trump's participation in the award ceremony amounted to a rare public appearance for her in Washington, outside of the White House. She hosted a White House luncheon for International Women's Day earlier this month.

Wednesday's appearance also fell in the middle of a busy week in the nation's capital for the first lady. She and President Donald Trump hosted a White House reception Tuesday night for all 100 US senators and their spouses.

Mrs. Trump also planned a third appearance on Thursday in Washington, but the White House has not released any details.

After joining Shannon at the State Department, the first lady later appeared at a White House panel discussion on women's empowerment, where Trump introduced his wife, a former model, as a "very highly accomplished woman."

He mentioned that her poll numbers are higher than his, and also said she "feels so strongly about" empowering women.

Since her husband's January 20 inauguration, the first lady has lived mostly at the family's Trump Tower penthouse in midtown Manhattan with the couple's son, Barron, 11.

She often meets the president in Palm Beach, Florida, when he spends weekends at his waterfront estate there. Trump has said his wife and son will move to the White House after Barron's school year ends.