Tushar Hiranandani eyes another biopic, and this is about Machilipatnam’s visually impaired entrepreneur, Srikanth Bolla 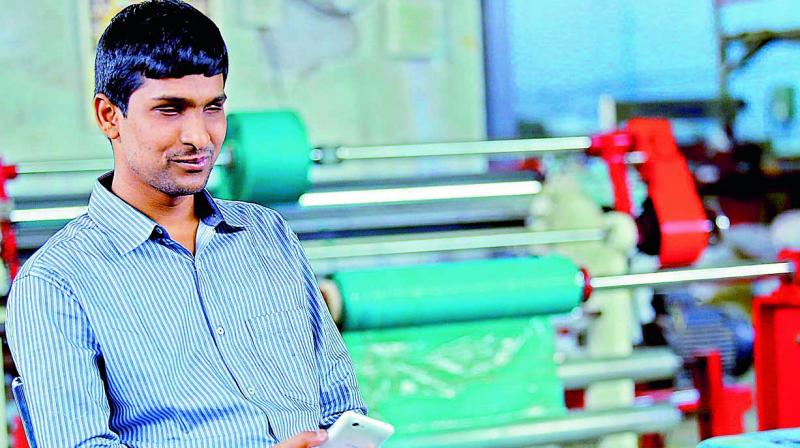 A native of Seethapuram in Machilipatnam, Andhra Pradesh, the 28-year-old Srikanth, was born visually impaired

Tushar Hiranandani, who made the biopic Sandh Ki Ankh starring Bhumi Pednekar and Taapsee Pannu, is all set to make another one. This time, it is on Srikanth Bolla, the Indian industrialist and founder of the Bollant Industries.

A native of Seethapuram in Machilipatnam, Andhra Pradesh, the 28-year-old Srikanth, was born visually impaired. The youngster, who wanted to pursue science in his 10+2 at school, was refused permission.

But Srikanth put up a fight and filed a case in the courts and won the case. He was allowed to complete his education in the school although ‘at his own risk.’

Letting his actions speak louder than his words, Srikanth cleared his 12th board exams, topping his class with 98% marks. He then went on to become the first international blind student to attend the Massachusetts Institute of Technology (MIT).

Even as he was getting employment offers from the corporate US, Srikanth chose to come back home to India. Back in India, Srikanth started Bollant Industries, which manufactures Areca-based products and provides jobs to several jobless people.

It only seems natural that someone considered making a biopic on Srikanth. And who better than Tushar? “I am only interested in making biopics,” Tushar tells us. “I am doing a Hotstar show currently. But I am also busy writing his film with Jagdeep Sidhu, a writer who has also written Sandh Ki Ankh.”

Interestingly, Tushar had hoped to make Srikanth Bolla his maiden project, before he had started with Sandh Ki Ankh. “But I could not do that simply because of budgetary concerns because a part of Srikanth’s biopic will also have to be shot in America,” he explains.

And while even Sandh Ki Ankh took him five years to complete, bringing with it its own challenges, he had to push Srikanth’s biopic for another reason too. “The right to his story was with someone else,” he explains. However, Tushar managed to get the rights with the help of Ravi Mantha, the CEO of Srikanth’s Bollant Industries.

Tushar’s biopic hopes to trace Srikanth’s journey from his birth when he was born visually impaired in 1992 and move on to how he attended MIT and then decided to come back to his native land despite the opportunities that awaited him in the States. “To me, Srikanth is not visually impaired; in fact, he has a better vision than all of us,” says Tushar.

Waiting to begin the shoot

The film will begin work once the COVID-19 situation allows the team to do so. “Most of the incidents indeed will be real, although we will also add some dramatisation for entertainment sake,” Tushar explains.

“Among the places to shoot will include real locations in his village in Hyderabad and the actual location in the school he went to and then when he met Swarnalata, a friend who is a part of the management at Bollant Industries. We will shoot a part of the story in the US where he went to study at MIT and will follow his life when he came back and started his factory and began winning awards.”

Talking about what inspired him most about Srikanth, Tushar tells us how it piqued his interest that in a world where everyone is frustrated about most things including their work, Srikanth created his own destiny with the help of great friends such as Swarnalata who believed in him.

“He went ahead and showed everyone that anyone can start a business and be successful too,” Tushar adds. Interestingly, the film will feature all real-life heroes, Tushar tells us. “All real heroes from Srikanth Bolla to Ravi will feature on reel and we plan to have the real Hyderabadi accent in the portions to be shot in Hyderabad. The idea is to keep the story as real as possible,” he adds.

While Tushar hopes for some producers to join in, for the moment, it’s Tushar’s wife Nidhi Parmar producing the film. Incidentally, Nidhi had produced Sand Ki Aankh too. “She has already been paying my writers and others and it is humbling to know she has a lot of faith in me,” Tushar tells us.