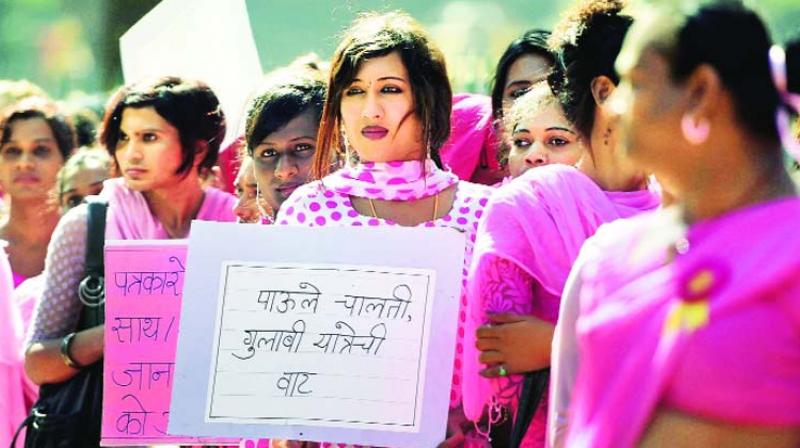 New Delhi: India's transgender community hopes the recent Supreme Court judgement on privacy will not just strike down a law against homosexuality, but also change mindsets on gender identities and sexual choices.

Days after the court said the right to privacy was a fundamental, community members expressed hope it would lead to the end of Section 377, which criminalises homosexuality.

"Acceptance by society is the first step towards the community's empowerment. And for that, people must believe that transgenders are humans like them," Khumanthem said.

An aspiring lawyer, hoping to fight for the rights of underprivileged women and children, Khumanthem said there was need to spread awareness about the community.

"People must know who we actually are and how we live our daily lives. They have to be sensitised. Only then will they start accepting us," she told PTI. The 22-year-old was here to participate in the recently held 'Miss Transqueen India 2017', the country's first beauty pageant for transgenders.

Founded by Reena Rai, the event not only aimed at giving the community a platform to showcase talent and beauty, but also to create a forum for advocating their concerns.
Looking at the recent landmark judgement pronounced by the apex court, Rai believed a dignified life for the transgender community was no longer a distant dream.

"If one goes by the Supreme Court's judgement, the community might soon be able to get proper education and employment and live a dignified life," she said.

Under its verdict making privacy a fundamental right, the Supreme Court, however, clarified that since the challenge to Section 377 was pending before another bench of the apex court, it would leave the constitutional validity to be decided in an "appropriate proceeding".

Rai added key to achieving the goal was "a change in mindset". "Change will not come until there is acceptance from us. No matter what the Supreme Court decides, if there is no end to the day-to-day discrimination we inflict on the community, change will not happen," she said.

Eliza, born Abomcha Ngangom, believed the process of empowerment had begun, but social ostracism came in the way of progress.

The transgender, who also took part in the beauty pageant, recalled how her parents used to worry over her fondness for "girly things" when she was a child.

Now a beautician running a successful parlour, Eliza said she was "tortured" by her family after she visited a women's beauty salon in Class 8.

Many stressed they were hopeful about the future. "We have had to struggle right from the time we came out about our sexuality. We have had to fight not just society, but also our parents," said Namita, a 26-year-old transgender make-up artist.

But members of the community today were not just beggars or sex workers, she pointed out.

"They are becoming inspectors and principals," she said, alluding to K Prithika Yashini, India's first transgender sub-inspector, and Manabi Bandyopadhay, the first college principal from the community.

About 1500 people from the community took part in the pageant, the first of its kind here. The winner, Nitasha from Kolkata, will now represent India in the Miss International TransQueen in Thailand.