The symptoms are to be seen in the sparks flying in Delhi because of the intense media coverage. 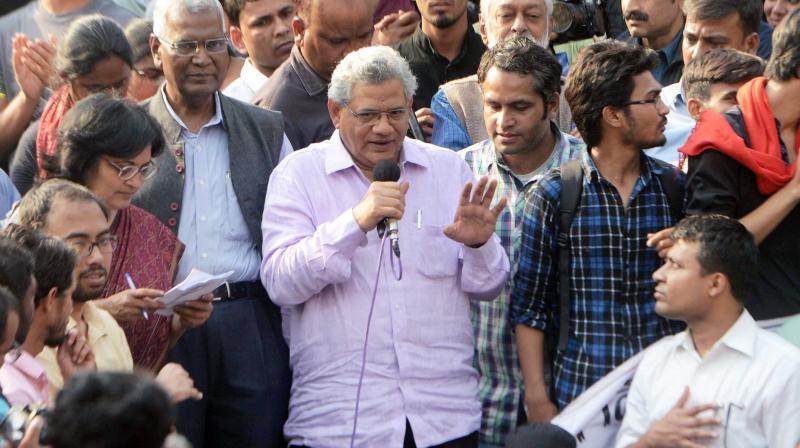 The high-profile, high-decibel student politics in Delhi, comprising Delhi University and Jawaharlal Nehru University, is really insignificant. The faces and voices that loom large on the capital’s campuses just melt away. The so-called glory is just so ephemeral. A few politicians have emerged from these teeny-weeny students union melee on to the national level, including the BJP’s Arun Jaitley from the Delhi University Students Union (DUSU) pool and the Communist Party of India (Marxist)’s Sitaram Yechury from the JNU Students Union (JNUSU), but their number is no greater than those who have emerged from student union politics from Osmania University (OU) in Hyderabad, Andhra University in Visakhapatnam, Gorakhpur University, Patna University and Allahabad University. But the tally does not go up to more than a score. So the clashes between the right-wing Akhil Bharatiya Vidyarthi Parishad (ABVP) and the rest of other so-called democratic student unions are to be treated as mere headlines on the city pages of a newspaper.

The government’s assault on free speech is happening elsewhere. The symptoms are to be seen in the sparks flying in Delhi because of the intense media coverage. Delhi is not the battleground. It is finance minister Arun Jaitley’s observation in an interaction at the London School of Economics, when he said whether assaulting national sovereignty can be part of freedom of speech, that is of far greater concern. For the majority of ordinary people, his remark makes immense sense. The nation cannot be broken up in the name of free speech and ordinary people have nothing but disdain for leftist radical groups. For the millions who are struggling to eke out their living and who have to cope with more pressing problems day in and day out, freedom of speech is not a priority. It is an unfortunate situation but that is the truth. Therein lies the danger of Mr Jaitley’s call for a debate on limits to free speech. He is setting up a false trail for the whole issue. He is surely aware that Article 19(2) and (3) provide for restrictions on freedom of speech for the sake of public order. Even these two sub-sections do not question that freedom enshrined in Article 19 (a) and (b).

As a lawyer from a right-wing party like the BJP, he is indeed justified in putting forward a conservative point of view about basic freedoms and fundamental liberties. There is however an underlying contradiction and inconsistency in the stance. It is the claim of many of the former “Young Turks” of the 1975 Emergency period, some of whom are now in the BJP, including Prime Minister Narendra Modi, Mr Jaitley, information and broadcasting and IT minister Ravi Shankar Prasad, that they are the torch-bearers of freedom of speech because they stood up for it against the dictatorial ways of Indira Gandhi then.

Mr Jaitley’s statement about the need for debate on free speech against this background marks a change in political colours, of a rebel becoming the pillar of the system, placing the government, state and nation above the individual. It has to be conceded that it is not just the right-wing politicians who are caught in this embarrassing situation. Many of the Leftists were in a similar situation when the Left Front ruled West Bengal for three decades and more. Yes. People change. The young dissidents become older conservatives. And it can be termed a natural progress. Mr Jaitley and others can take solace from the fact that the British romantic poet William Wordsworth, who was fired by the French Revolution when he was young, became a stolid conservative during the Napoleonic wars. This was seen as a betrayal by younger romantics, like Shelley and Byron and it seems an ignominious fall from the high pedestal for Wordsworth.

Mr Jaitley’s fall or rise from rebel to conservative is ironic because his statement is an attempt to undermine the liberal principle of liberty, which does not change with the individual’s change in political beliefs and affiliations. If democracy is to survive in India and elsewhere, liberty cannot be caged and arguments suggesting that there should be limits to freedom of speech is a clear message from those in power that dissent, the soul of democracy, will not be tolerated.

Mr Jaitley is also indulging in the dangerous game in the name of reasoned debate of erasing the distinction between expression and action under the freedom of speech and that acts of sabotage of the ultra-left groups who have declared war against the Indian State. It is the inalienable right of an individual in a democratic polity to question everything, including national sovereignty, and this includes the fetishism about the national flag and national anthem. It has to be proved in law that this exercise of the freedom of speech has endangered the nation and the State by spreading disaffection. To say that no one has the freedom to speak against the nation in a democracy is to consign India to the low category of unfree societies, scattered all over Asia and Africa. It is also distortion of facts amounting to a lie to say that those who question the Central government’s policy in Jammu and Kashmir, and the acts of omission and commission of the security forces in J&K and in the Northeast are not questioning national sovereignty per se. But more importantly, there can be no taboos. Of course, the logical implication is that ultra-nationalists and ultra-leftists must be left to speak their thoughts, and they will be liable for their expression when it can be proven in a court of law that their freedom of speech is spreading public disaffection and social unrest. But neither the leftists nor the rightists have a right to prevent the other side from speaking. It is the job of the government to see to it that both sides enjoy the freedom of speech. And that was the assurance that was expected from Mr Jaitley.