Delhi loved and lost. Will it love again?

A college in Kutch too was painting the town red. Not with satin hearts and red velvet cupcakes, but with blood. 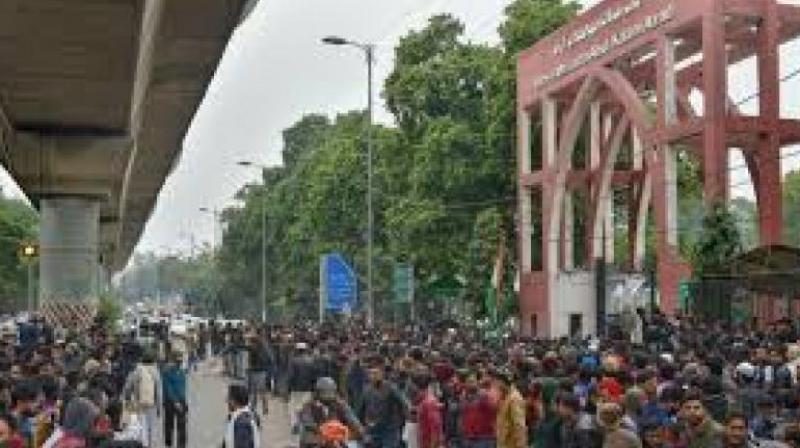 How was it for you? This last month of love? I sat on my soapbox in Sherwood Forest and asked the squirrels gathering around me. The one that appeared to be sweeping the forest floors in search of nuts, with a dark ring of fur round his neck that could have been a muffler, and whiskers like a little black tache, nodded vigorously. It had been a good month — he’d felt the love.

Four thousand, five hundred and fifty miles away in Delhi, so had chief minister Arvind Kejriwal. His incumbent party had swept the Delhi state elections, winning 62 seats to the ruling party’s paltry eight. Analysts explained that it was a vote for status quo, for efficiency, or a slap in the face ofthe rampaging BJP. But I’d like to think it was a vote for solidarity. For love. Delhi = Love?? Pull the other one! That’s not an emotion we associate with our cut-throat capital, accounting for 40 per cent of rapes and 33 per cent of all crimes against women in India. As a 21-year-old working in television there, I’d been molested, swindled, stalked, and nearly killed (with a karai  –  honest).

Twenty years later, in 2016, I returned to Delhi to further disasters when the hotel fried my electronic devices to a crisp, barring me from both my money and contacts. When they failed to compensate or help, I turned to the peeps who’d invited me over, to find them as perverse. “You’re calling me at seven in the morning? Jaante hain main kaun hoon?”one huffed. Panic-stricken, I began to call one barely known Facebook friend after another to see who might assist. Before long I had a host of offers from unexpected quarters of their company, cars and phones!

If the kindness of strangers saved my bacon, it was also this generosity that led Delhi’ites in their thousands to turn out in support of the protesting women of tenacious Shaheen Bagh, and JNU and Jamia students, under attack from right-wing goons. With love so unexpectedly given precedence, it was no wonder that Delhi went on to democratically sweep out hate.

A college in Kutch too was painting the town red. Not with satin hearts and red velvet cupcakes, but with blood. The principal of this Hindu sectarian institution, which prohibited menstruating women from participating in regular activities, suspected a large percentage of her students of lying to her so they could study unhindered (the gall! the depravity!). She ordered 68 of them to strip to prove their period-free status. The students complained and the enforcers were arrested. Briefly.

That might make educational institutions think twice before humiliating harmlessly ovulating students again, but will it make even a dent on the taboo around menstruation? Not while “godmen” like Swami Krushnaswarup get away with decreeing that menstruating women who cook will be reborn as dogs, and the men who eat their cooking, as bullocks. The word you want is the British “pillock”, Dasji; many muck heaps worse than a harmless bovine, and the perfect name for brain-dead bigots like you.

Talking of British pillocks, BoJo lulled Brit-Indians into thinking they were feeling the lurrvvve when he scooped Narayana Murthy’s son-in-law Rishi Sunak into the blubbery bearhug of his Cabinet. Especially chuffed that he’d replaced Pakistani-origin Sajid Javid as Chancellor of the Exchequer, it only dawned on desis later that Rishi is as much of a privileged-and-not-parting-with-it toff as farcically malevolent Jacob Rees-Mogg. With his pots of money and perfect coiffure, I cannot see Rishi generously doling out love. Nor government largesse to the 15 million living in poverty in the UK. But he might win Hair of The Year yet and make us proud.

Nor will I hear a word against Pakistanis. Especially the kind that glower at you from behind the steering wheel till you bring up biryani. Subcontinental taxi drivers, with whom I have a heart-to-heart on every trip out of the Sherwoods, are my Best Ever Friends (not counting squirrels).  “What on earth is going on in your country?” they cry. “Hah! What about yours?” I reply. And we both guffaw.

Of course, if British Indians were celebrating the appointment of an apparently normal desi to the Cabinet, they were right, as the other two are Priti Patel and Cruella, sorry, Suella Braverman. Priti hates the marginalised, the sick and the poor, and in pole position to help them all in shiny new Brexit Britain, she delights in making their lives a misery instead. From one brown gal to another, Priti, I’m not gonna beseech you to look into your heart, because you don’t have one. Yet, look into your past and see if you can’t find people who were ostracised when they first arrived, but through industry and the occasional opportunity sparked by the kindness of strangers, worked their way to where YOU are now. Remember, pretty please, and consider paying it forward.

So, if in these weeks of love, you didn’t feel it in the air, if your town was painted the wrong sorta red, have I got the month for you! For this is the month of warlike Mars, for the Ides of March, when the self-serving get their comeuppance. Cook up revenge all this month with a, er, vengeance, and don’t wait to serve it cold. Fan the flames of your rage at the fundamentalists, the brutish politicians and their circles of greed. Then burrrrn ‘em with your democratic rights. Speak up. March. Vote.

Do as Delhi did. You may never hear me say that again!

P.S.  As it turns out, you really won’t hear that from me again. Two days after I submitted my paean to Delhi’s love and kindness, it has descended into a hell of rioting and murder, and its worst self. Its true self? Prove us wrong, Delhi. Rise again.