Opinion   Columnists  01 Mar 2022  Aakar Patel | Vote to abstain at UN will hurt India as it fails to live up to ideals
Opinion, Columnists 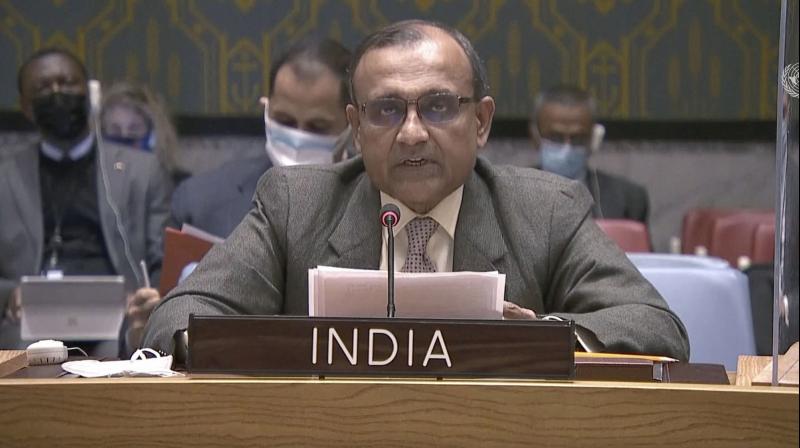 India’s vote did not really matter in the end, because Russia as a permanent UNSC member has a veto, which it used, and it was known the condemnation would fail. (AP)

India has abstained on the vote in the United Nations Security Council (where we are a non-permanent member) condemning Russia for its invasion of Ukraine. India said that it was deeply disturbed, called for an end to violence and for respect for sovereignty and territorial integrity, and then said that “for these reasons” it chose to abstain. This may seem puzzling as India is repeating the world’s case against Russia’s war, and then refusing to condemn it.

But the reality is that India faces a difficult period in diplomacy. Russia provides more than half of India’s military materiel. For instance, 96 per cent of our main battle tanks are Russian, our only aircraft-carrier and only nuclear-powered submarine are Russian, 71 per cent of our fighter jets and all six of the air tankers are Russian. This is not classified information: these numbers come from the US Congressional Research Service. War and even training in these extremely high-performance machines requires constant spare parts and servicing, and for this reason India must remain connected to Russian suppliers. Additionally, experts see Russia as the peacemaker between us and China on the issue of Ladakh. So, we cannot afford to displease Mr Putin. India’s vote did not really matter in the end, because Russia as a permanent UNSC member has a veto, which it used, and it was known the condemnation would fail. However, it was an opportunity for the world to come together against aggression and the largest democracy chose not to side with the invaded country. Interestingly, China also abstained along with us.

India’s foreign policy under the current government has not been able to find its rhythm because it doesn’t have a theme. Throughout our history as an independent nation, India has presented itself abroad as an ancient land with secular and inclusive traditions. This changed after 2014 but without an official shift in doctrine, meaning there was no written policy that proclaimed Hindutva was India’s ruling ideology. Recent studies show that the government has begun instructing diplomats to focus on events abroad which showcased India’s Hindu traditions. This made some diplomats uncomfortable, but the change was accompanied by recruiting more diplomats who were aligned to the BJP’s ideology. For the first five years of this government, the change did not matter because the ideology did not show itself within India to any large extent.

After 2019, our diplomats have been kept busy in a defensive posture because the ideology bared its fangs against our minorities. After the second win of 2019 came a series of internal strokes that had external repercussions. The first was the decision to undo Article 370 of the Constitution. This was accompanied by an Internet blockade on all Kashmiris for 17 months. Kashmiri children had no access to online education for all of 2020. In the US House of Representatives (their Lok Sabha), a resolution was moved to condemn India’s actions against Kashmiris. The resolution could not progress far because the Republicans were in charge and President Donald Trump was our friend. Only days after Joe Biden’s administration was sworn in, India lifted the 17-month blockade, and one reason was the pressure it felt was sure to come now that Mr Trump was out.

Weeks after the Article 370 move, a confident BJP passed the Citizenship Amendment Act. The world was again alarmed. In the European Parliament, a resolution was moved condemning India. It was reported here that it would likely pass. India’s diplomacy managed to stave off the vote but the quid pro quo was that we would not implement the CAA (which has not been enforced). These are the sort of things that India’s diplomats have not had to deal with in the past with those who are supposed to be our friends. The contradiction — portraying ourselves as secular and pluralistic abroad while acting in the opposite fashion at home — has not been easy to resolve.

To add to this issue which we have brought on ourselves is the problem of the neighbourhood, also coming after the change in Article 370: the Chinese incursion in Ladakh. We must defy China, but also be friendly with Russia (which is aligned with China against the West). We want to get closer to the United States militarily and have signed a series of agreements after 2014, but we do not know how close to get. The Quad alliance was meant to be a naval partnership, but that role has now been given to something called AUKUS, of which we are not part of, while the Quad is dealing with Covid-19 vaccines.

Our external affairs minister Subrahmanyam Jaishankar says the world is multipolar and so India must be opportunistic and discard what he calls the “hesitancies of the past”. However, what is being exposed is that we have no real doctrine and no idea how to deal with the world. It is hard not to conclude that our standing in the world has reduced because of what we have chosen to do internally. On the other hand, we have gained no new friends or allies by going down the road that we have.

Fortunately, we don’t have to debate this or even recognise this debacle. Our global stature is less important than opposing namaz, beef and the hijab, and we will remain focused on that.