Yogi Adityanath, the saffron dhari CM of UP, believes that everything in his state is hunky-dory 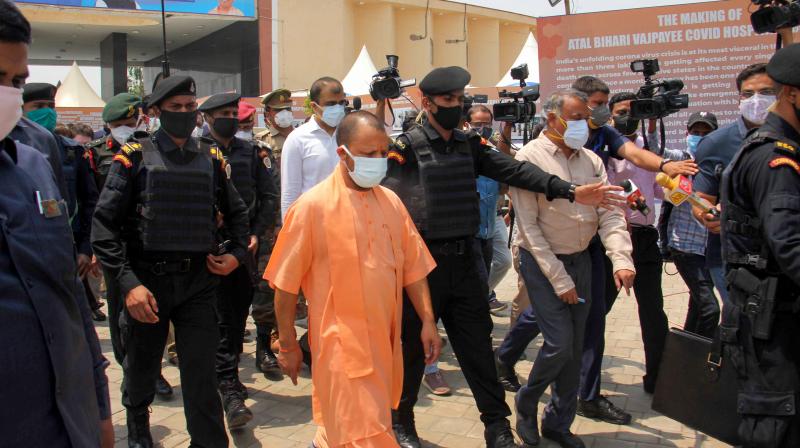 Like the proverbial pigeon that closes its eyes and believes that the cat has gone, Adityanath thinks that if he closes his eyes all the miseries that people in his state are facing will disappear. (Photo: PTI)

Yogi Adityanath, the saffron dhari CM of UP, believes that everything in his state is hunky-dory. There is no shortage of oxygen, hospital beds, ventilators, essential medicines. Those who say there is are criminals in league with black marketeers and anti-social elements and must be dealt with stringently under the law. Like the proverbial pigeon that closes its eyes and believes that the cat has gone, Adityanath thinks that if he closes his eyes all the miseries that people in his state are facing will disappear.

But unlike the pigeon, Yogi has teeth to bite. On April 24, he asked his officials to take action under the draconian National Security Act (NSA) and the Gangsters Act against anti-social elements who spread “rumours” and propaganda on social media and try to “spoil the atmosphere”. His additional director general of police, Prashant Kumar, added that those who desperately vent their anguish at the transparent mismanagement and shortages in the state, want to “tarnish the image of the government”, and FIRs will be filed against them. Hospitals were imperiously told to keep their mouth shut about the crisis of oxygen supplies, or else they will face the majesty of the law.

A PIL was filed by a social activist in the Allahabad high court against slapping of criminal charges on families of critical patients issuing an SOS on social media. The PIL stated that people are afraid that they will be arrested for “spreading rumours about scarcities”. It further stated that some relatives were actually arrested for this crime.

The Supreme Court has now given a fitting rejoinder to the undemocratic high-handedness of the likes of the UP CM. The hon’ble court on April 30 said: “If a citizen ventilates his grievances through social media posts, there is no presumption that it is not genuine. There cannot be and should not be any clampdown on free speech. If anyone is booked for airing their grievance about non-supply of oxygen, medicines or availability of hospital bed, it will amount to a clampdown and we will treat it as contempt of this court (Emphasis mine).” For good measure the court further added: “Let a loud message go out to the states and the DGPs. We will brook no violation of the rights to free speech of a citizen when the country is going through a humanitarian crisis during a health emergency. Let there be free flow of information. Grievances aired through social media posts could actually help the government and local administration to attend to common deficiencies in the healthcare sector and attend to them speedily.”

Obviously, Adityanath disagrees. From the beginning of his term, his entire approach is to misuse the law for clamping down on anyone who remotely seems to suggest that all is not well in his state. Earlier, we have seen how sedition cases were slapped on journalists who had the temerity to report the poor quality of food being provided in midday meals in schools in the state. Really, Mr Adityanath? Sedition? As the Allahabad high court once exasperatedly alluded, the tendency of the CM to treat everything as my highway or the wilderness, has gone too far. Siddiqui Kappan, a journalist from Kerala, was arrested by the UP police on his way to Hathras to cover the dalit teenager’s heinous gangrape. At that time the venerable Yogi had used his magisterial powers to prevent journalists from meeting the family, and done everything else to somehow hush up the case. Kappan, in poor health, has languished in jail ever since, until a recent judicial intervention to shift him to AIIMS.

The central government obviously thinks that Adityanath is doing the right thing. On April 25, it invoked the IT Act 2000 to instruct Twitter to remove for viewing in India over 50 posts that were critical of the government’s handling of the pandemic. These tweets related to the shortages of medicines, beds, oxygen, the huge crowds at Kumbh Mela and the tragic visuals of mass cremations.

There is only one reason why governments begin to behave this way. It is the hubris of power. When people in power begin to believe that that power entitles them only to praise, and that all criticism is against the interests of the state, and those interests are their exclusive monopoly, they react in this undemocratic way. There is also the myth of the so-called “strong” leader. To my mind, Adityanath loves the image of the autocratic leader who will brook no opposition. Possibly, he draws his inspiration from the perceived persona of the PM himself, who as the “strong” leader has refused to hold a direct press conference ever since he came to power, and considered meeting with the leaders of the farmer’s agitation as inimical to his strong-man image. The net consequence of such hubris is demagoguery, and the justification, at any cost, of gross incompetence in governance.

Democracy is a fragile plant. If those who have been elected to tend to it believe that the entire garden is their preserve, and everybody else is an unwarranted trespasser, the plant will wither. For the moment, Adityanath has been soundly put in his place by the Supreme Court. But, such tendencies do not evaporate by one reprimand. They become part of a mindset, and reinforce the actions of other would-be demagogues. To Adityanath, and his ilk, I have only this couplet in response: “Yun dikhata hai aankhen mujhe baghban, jaise gulshan pe kuch haq hamara nahin: The gardener looks at me in such a way, as though I have no rights to the garden.”