The collective leadership that the BJP was known for became a matter of the past and in its place there emerged a political duopoly. 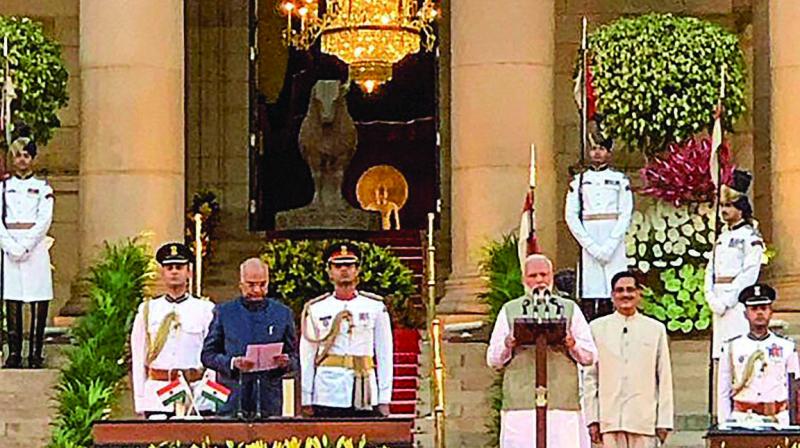 There were four big questions on the eve of Prime Minister Narendra Modi assuming office, along with his council of ministers, for the second time after completing his entire tenure. The first related to the man increasingly mentioned as the legitimised inheritor of Mr Modi’s legacy — BJP president Amit Shah. Speculation was on if he would be inducted into the government and leave handling party affairs to a lesser mortal.

Two months ago, when Mr Shah was named BJP candidate from Gandhinagar and Lal Krishna Advani dropped from the list of candidates, it was presumed that he would be inducted as Union home minister. In this appointment, there was a huge point to score against the Congress and other non-BJP parties. From the time that Mr Modi began his political ascendance in 2013 and Mr Shah was given the prime position in the 2014 campaign, the BJP claimed that the portly leader had been framed as part of a “conspiracy” to defame him and the Hindu community. Since the charges were orchestrated by the Union home ministry, could there be a more direct payback than placing Mr Shah in North Block?

Mr Shah’s induction underscores his position in the BJP pecking order as second to only Mr Modi regardless of his portfolio and being called to take the oath after Rajnath Singh. This marks the almost complete eclipse of the previous generation of BJP leaders. Mr Singh is now the only high-profile contemporary of Mr Modi remaining in a position of influence, while others in the BJP currently were inducted into the top echelons after him. Arun Jaitley’s exit for health reasons and Sushma Swaraj’s exclusion, for which no explanation has been given, are clear indicators of the change of guard within the BJP.

The collective leadership that the BJP was known for became a matter of the past and in its place there emerged a political duopoly. Although questions were raised, most notably by party veterans, most who once eyed positions for themselves in the future, chose to accept the new reality. In the run-up to the elections, Nitin Gadkari made oblique statements that generated speculation, but this mandate has settled internal equations and a watch needs be kept on his fate within the new order. Given that the BJP believes in the “one-man, one-post” principle, it is a matter of time before a new president is “elected”. Watch will have to be kept on the relationship between the new chief and the Modi-Shah combine. To a great extent, only solid understanding between the three would expand the party network in states which are now on the BJP radar and enable it to secure political power in places like West Bengal, Delhi, Odisha and further spread its wings in the southern states.

The second big question was over the steps Mr Modi would take to provide, as promised, a more inclusive India, one where the BJP would not rest with just the “Sabka Saath, Sabka Vikas” coinage but also seek “Sabka Vishwas”, or trust of everyone. Specifically, Mr Modi said his government must reach out to those who did not vote for the BJP, including the religious minorities. Implicit in this declaration was the sentiment that it was not enough to run government schemes which did not exclude beneficiaries on the basis of religious identity, but the BJP must politically reach out too to the groups that were feeling insecure and targeted. The most visible action could be the denial of ministerial berths for notorious motormouths. The composition of Team Modi, however, sends out mixed signals — Maneka Gandhi and Anant Hegde are out, but Giriraj Singh, Sanjeev Baliyan and Niranjan Jyoti continue, suggesting that the party remains committed to Hindutva and is willing to make adjustments provided a leader has a strong social base that is essential for the BJP to retain its electoral hegemony.

Third, Mr Modi also pledged commitment to the coalition dharma and one expected that just as he had been accommodating towards allies while making seat adjustments, he would be generous with allocating portfolios. But by denying partners their wishes, Mr Modi has demonstrated that the government remains a BJP hegemony, with just a token or ornamental presence of allies. It appears certain that the BJP has set itself in Bihar on the same path that it treaded in Maharashtra in 2014. At that time, the BJP contested Assembly elections in the state on its own and later reunited with the Shiv Sena to form a government. It is certain that efforts will be mounted in Bihar for the BJP to reclaim its position of being senior partner, which it yielded in 2004-05. Moreover, besides its overbearing approach to the NDA partners, the government is also short on regional representation, demonstrating that Mr Modi’s new coinage “National Ambition, Regional Aspiration” remains just what the alliteration means in Hindi — “Nara”, or slogan, jumla.

Finally, Subrahmanyam Jaishankar’s surprise induction in the Union Cabinet is a pointer to the talent deficit within the BJP. The large-scale dropping of sitting ministers is also an indication that performance issues dogged Modi-1, yet they were persisted with due to electoral compulsions. But after the spectacular performance, the Prime Minister felt no necessity to carry administrative liabilities and is experimenting with fresh talent. Seen in conjunction with the short shrift to allies, this government may well turn to be a more Modi-centric administration, and after the great surge, one can expect many a purge.