Aakar Patel | ‘Unlock’ rules are illogical: If flights allowed, why not trains?

The Indian Railways is still by and large largely shut, and has been shut since the lockdown began 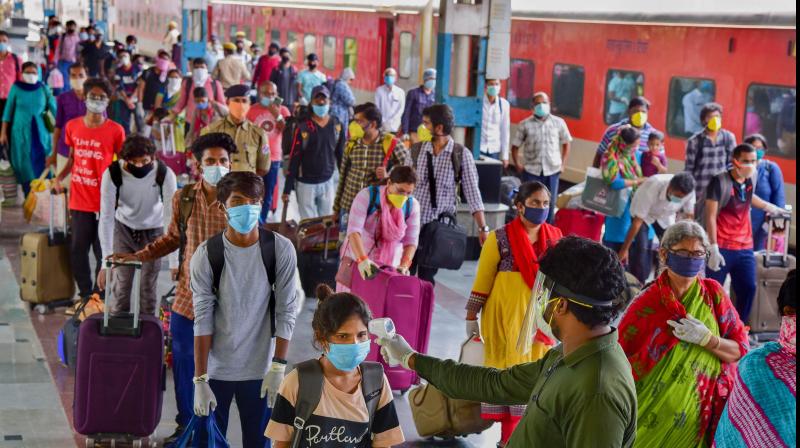 What is the logic of not having trains run when planes are allowed to run full?

From Tuesday, September 1, we will have Unlock 4.0.

I have lost track of what this means and I do not think anybody really understands it. What the Indian government has done is try and manage the spread of Covid-19 by keeping things shut. If India forces people to stay away from one another by denying them access to services, it will stop or slow the spread of the infection.

This has produced rules that, as I said, I do not really understand. For instance, the airlines have been operating since May, and have been flying for more than three months now. Flights are allowed to be flown at full capacity, with the middle seat occupied.

However, the Indian Railways is still by and large largely shut, and has been shut since the lockdown began. From running 17,000 trains daily, it today runs only 230 special ones.

What is the logic of not having trains run when planes are allowed to run full? Air passengers cannot maintain the six-foot separation on their seats so it seems illogical to allow people to fly but not travel by train.

The benefit to stopping the spread of Covid-19 is uncertain but the damage to the economy is visible. Reports from Surat last month said that the production of textiles was less than 25 per cent of normal and the big reason was the lack of labour.

More than 30 lakh people had left Surat and its surrounding industrial zones in April and May, according to a report in the Hindu Frontline magazine published on July 31.

There is almost no way for these people to return to their jobs even if they wanted to now come back. There are reports that mill owners and other businesses have begun flying labourers back. But why not just open the Railways? This has not been explained to us.

Delhi’s Metro will reportedly open this week with 50 per cent capacity (again note the difference with airlines), while Mumbai’s local trains, the city’s lifeline and its artery, have stayed shut.

I saw a very moving note from journalists to the chief minister asking that those who were not accredited with the government to be allowed to use the trains because it was too expensive for them to take taxis everywhere.

Schools and colleges will remain shut but exams will continue to be held. Again, this makes no sense to me. If we are asking all schools and colleges to do online classes, why are we then asking students to gather in masses to take their exams?

We are told that cinema halls will have to stay shut as it won’t be feasible to run shows with only 25 per cent capacity due to physical distancing norms. But a movie is about as long as a flight and the seats are equidistant in both. What is the thinking behind the decision to disallow movie halls, a very large sector of the entertainment industry and its employment, from opening?

It all seems slightly eccentric to me, and I suspect that some of this is touched with the moralism that we see in the Prime Minister. For instance, restaurants were allowed to open but not bars. Why? There is no standard format in a restaurant’s seating, as we know. And the same is true for bars. The only reason seems to be that the government in some way looks down on those who drink.

In Unlock 4.0 bars, will be allowed to serve liquor over the counter but not inside. Meaning the bar will be turned into a liquor store and the employment that its waiters and cooks and other staff would have otherwise got is not available even today, in September, more than five full months after the lockdown began.

Some of the confusion has then come from the Centre versus State differences. Apparently, the opening of gyms is allowed by the Centre but many of the states are not letting them do so.

In other nations, the lockdowns have been mostly voluntary. In India, it has been like a curfew. Even today, the Mumbai police can confiscate your vehicle if you cannot show a “good reason” for being out. What is a “good reason” is left for the police to determine of course.

We have one nation one tax, but we do not have the free movement of people. Those going from one state to another state must fill out some application and ask for permission which may or may not be given.

As I said at the beginning, India has tried to slow or stop the spread of Covid-19 through denial of services. Has it worked? I don’t think so. India is the only large nation along with Argentina whose numbers have continuously and without a break risen from March. The only way of stopping the spread of Covid-19 is good individual behaviour at the mass level.

But we have Union ministers in meetings wearing their masks on their chin instead of covering their mouth and nose. How can such people communicate good behaviour to the public? They simply cannot.

And so we have the endless tweaking of rules, all leading to failure as is visible in the numbers, with bureaucrats being kept busy making funny and illogical rules for 1.0 and 2.0 and 3.0 and now 4.0