Opinion   Columnists  01 Oct 2022  Shreya Sen-Handley | What Chucky did next, and other regal musings
Opinion, Columnists

Shreya Sen-Handley
Shreya Sen-Handley is the author of the award-winning 'Memoirs of My Body', short story collection 'Strange', and new travelogue 'Handle With Care', and a columnist and playwright. Her Twitter and Insta handle is @shreyasenhan.

Pointing inquisitors to this column every time a royal question is popped, I’d be at liberty to return to my pleasantly royalty-free life 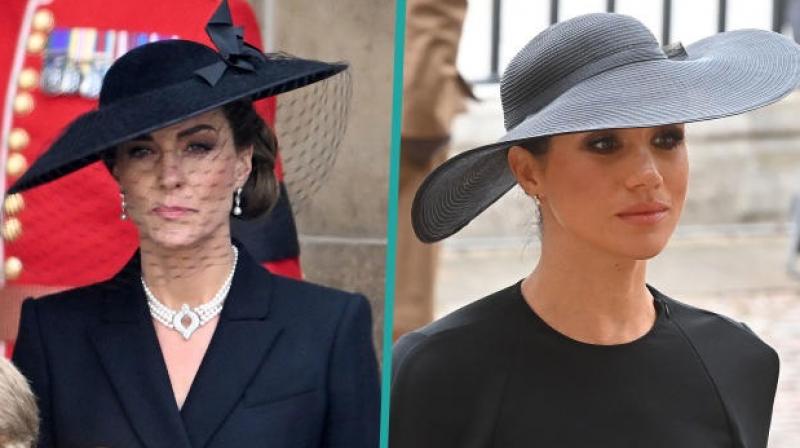 Who wore the nattier mourning hat — Kate or Meghan? (Photo By Arrangement)

The only questions asked of the British last month, whether royalist or not (I’m definitely NOT), are about the over-the-top royal funeral and its improbable aftermath.

Charles is finally King at 73 — whoddathunk?

Having been asked my opinion of Charles more times in the last weeks than I’ve given him, or any of his family, any thought in my 22 years in Britain, I concluded that I would have to furnish authoritative answers for the many grilling me. Gah.

Pointing inquisitors to this newspaper column every time a royal question is popped, I’d be at liberty to return to my pleasantly royalty-free (in more senses than one) life.

I don’t, but if you must ask, I agree with Napoleon’s espousal of a meritocracy. Of course we know he didn’t institute one, becoming a monarch of sorts himself.
But isn’t that ever the problem? You remove one entitled freeloader, only to find another sneaking into his p(a)lace.

After the beheading of the first King Charles in England, with much excitement about a republic being founded, Oliver Cromwell, the civilian rebel leader, only went and became a king himself.

This obviously springs from a flaw in human nature, which impels us to either become false gods, or worship them. If we must have them, I’d rather they weren’t taxpayer-funded.

But I hear King Charles III has promised a “slimmed-down monarchy”. Well, huzzah, but I won’t hold my breath.

2) Was Queen Elizabeth II your “favourite grandmother”, like she’s everyone else’s apparently?

Erm, no. My favourite grandmother was my own. A strong-willed, little Bengali woman who trekked across foreign lands in her sari, wrote family planning manuals for village women, and was imprisoned by the British in India for marching against them. The late Queen’s Dad would have (indirectly) done the jailing.

So, not even when I’m deep in my Jane Austens, delighting in my clotted cream and scones, do I think of the Queen as Granny-Adorable!

That said, I don’t dislike ERII. The British system being what it is, with little pressure to change, or make society equitable, she carried out her bequeathed role, with, by all accounts, considerable dedication.

And there’s always some slight pleasure in having a female leader (though I draw the line at finding Liz Truss’ premiership joyful).

3) Can King Charles III be a force for good?

Ask instead why he didn’t call himself King Arthur — “Once and Future King”? With Arthur as one of his middle names, adopting it as his kingly appellation would have been fitting, if grandiose; but what about royalty isn’t the latter? Association with the legendary Arthur would have been a quick win. On the other hand, the two King Charles’ that preceded ours, in losing their heads in more ways than one, hadn’t exactly covered themselves with glory.

Can we hope that Charles’ reasons for persisting with his benighted name aren’t practical alone, and he’s starting as he means to proceed – by not allowing the institution to obscure the individual he is?

And who be that, pray?

Not the best husband definitely! But when have we ever held that against male celebrities? Perhaps not even a doting father, if his ups and downs with Harry are indicative. But the royal household and British rags played their part in both debacles.

Bullied as a boy in school, and even in adulthood by his family (if the Netflix hit The Crown is to be believed), and by the British media even recently, if Charles could draw on his own experiences of harassment to understand his multicultural country, he could be that rare British monarch with empathy.
He might already have the makings…

An ecological champion long before it was fashionable, he’s also a major patron of the arts in Britain; batting for organisations with the gumption to employ gobby brown folk like me.

A progressive sovereign capable of representing a plurality?
Gorblimey!

4) Who wore the nattier mourning hat — Kate or Meghan?

Blech. If for nothing else but her mistreatment by the press, and sometimes the public, the best hat prize should be Meghan’s unquestionably.
But the burning question remains…

5) How many marmalade sandwiches were ingested in the world’s most unctuous queue to see their dear departed Queen?

No expert on marmalade sandwiches (though the occasional jam tart is scrumpy, thank ye), I reckon even the Queen’s best bud Paddington can’t count the millions consumed!

The British love for toeing the line in their own country but flouting every rule of civilised society around the world is legendary. Almost as well-known as their history of being jammy.

The pluck and luck are ebbing, but the herd instinct abides.

Yet, isn’t this embarrassingly long and servile queue further evidence of a worldwide disease? Aren’t we all guilty of capitulating to the cult of celebrity?
Whether Hollywood/Bollywood stars, rapacious oligarchs, or political strongmen, we glory in falling at their (usually mediocre) feet. It isn’t even new, because humanity’s always kowtowed to Trumped-up potentates, and worshipped false divinities.

From the dawn of time, you see, we’ve all been royally FAQ-ed.