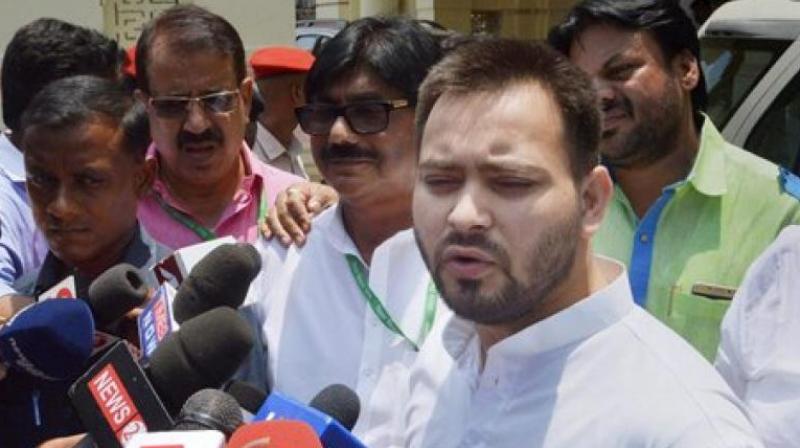 Rashtriya Janata Dal’s chief ministerial candidate Tejashwi Yadav has made a concerted effort in the ongoing Bihar Assembly polls to expand the support base of his party beyond its core Muslim-Yadav vote bank. Not only has the RJD given a large number of tickets to upper caste candidates but Tejashwi makes it a point to hammer home this point during his campaign. The RJD leader ensures he is flanked on either side by the party’s Bihar chief Jagdanand Singh and Rajya Sabha MP and party spokesperson Manoj Jha at his major rallies. Singh is a Rajput — in fact, he was the first upper caste leader to be given charge of the RJD’s state unit. Jha is a Brahmin and is said to be Tejashwi’s right-hand man. The upper castes in Bihar have never voted for the RJD as they have a special aversion to Lalu Prasad Yadav’s brand of politics. It is to be seen if the course correction attempted by Tejashwi will work to his party’s advantage.

Former Madhya Pradesh chief minister Kamal Nath enjoys a good rapport with his party colleague and Rajasthan chief minister Ashok Gehlot. But when it came to picking a campaigner for the Madhya Pradesh bypolls, Nath chose Sachin Pilot, who is not exactly Gehlot’s favourite person. Nath apparently made several phone calls to Pilot requesting him to campaign in the Gwalior region which has a large Gujjar population. The veteran leader is also believed to have told Pilot that he was the only one who could do justice in this belt. Pilot has since addressed several election rallies in Madhya Pradesh but if Nath was hoping to pit the young Congress leader against his bete noire Jyotiraditya Scindia, he must have been disappointed. Pilot avoided attacking his former colleague Scindia in his speeches and instead went full throttle against Madhya Pradesh chief minister Shivraj Singh Chouhan. As for Pilot, this invitation is an opportunity to send out a message to his detractors that he has national appeal and cannot be ignored.

Candidates who were hoping to be nominated by the Bharatiya Janata Party for the Uttar Pradesh Rajya Sabha elections spent several sleepless nights last week because of the delay in the announcement of the final list. Urban development minister Hardeep Puri was among those who went through some tense moments before the official list came out. His staff worked the phones endlessly to find out the status of the nominations. Puri had a truncated first stint in the Upper House as he was elected two years ago in place of Manohar Parrikar who resigned his seat when he went back to Goa as chief minister. Though there was no doubt that he would be re-nominated, Puri was on tenterhooks primarily because there was a buzz that another former diplomat, known to be the Prime Minister’s favourite, was likely to be inducted into the government. In the end, all’s well that ends well as Puri was very much among the eight candidates on the BJP list.

Punjab to go for early polls?

Is Punjab chief minister Amarinder Singh contemplating an early Assembly poll? Though the next election is only due in 2022, there is a growing view in the Singh camp that it might be a good idea to dissolve the assembly and call for an early poll, preferably along with the Assam and Kerala elections next year. This section of the Punjab Congress believes that Singh is currently on a strong wicket, especially after the tough stand he took on the farm laws passed by the Centre. His detractors in the party are currently in no position to pose any serious challenge to Singh. Similarly, the Shiromani Akali Dal, which recently parted company with the Bharatiya Janata Party, is still in the process of putting its house in order. Not only were the Akalis mauled in the last assembly election but they have also been facing serious internal dissensions. Given more time, there’s every possibility that the Akali Dal will recover lost ground over the next two years while Amarinder Singh’s stock may slump by then.

A seemingly minor bye-election in the Assembly segment of Baroda in Haryana has acquired immense significance as political pundits believe the result will reflect the popularity or otherwise of the Bharatiya Janata Party-led state government. Several disgruntled legislators from the Dushyant Chautala-led Jannayak Janata Party do not want their party to continue its alliance with the BJP because of its stand on the farm laws which are being opposed by farmers in the state. They have been mounting pressure on their party leadership to snap ties with the saffron party but to little avail. These legislators are looking for greener pastures but they have decided to await the bypoll result before upping the ante. However, their defiance could well come to a nought if the BJP wins this election.