What upset Malik; Nirmala’s dilemma; will Preneet follow Capt. out of Cong? 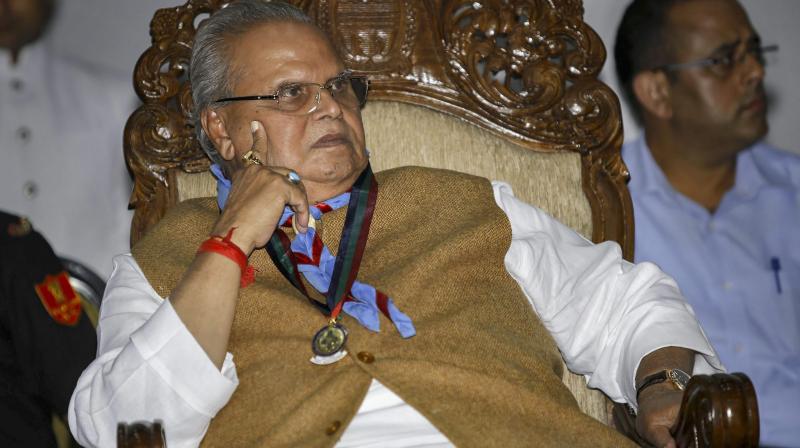 Mr Malik is apparently feeling emboldened as he believes he has nothing to lose since it has been conveyed to him that he will not be getting another gubernatorial posting. (PTI)

Meghalaya governor Satyapal Malik has been unusually vocal over the past few months. He has repeatedly spoken out in favour of the agitating farmers, revealed that there was rampant corruption in Goa and that he was offered bribes to clear certain files pertaining to an RSS functionary and a high-profile corporate house when he served as Jammu and Kashmir governor. Mr Malik has further implied in his interviews that Prime Minister Narendra Modi did not act after he brought these instances of corruption to his notice. So why has Mr Malik suddenly decided to speak out even at the risk of embarrassing the Modi government? Mr Malik is apparently feeling emboldened as he believes he has nothing to lose since it has been conveyed to him that he will not be getting another gubernatorial posting. As for Mr Malik's stand on the farm stir, it is understandable since he hails from West Uttar Pradesh, the epicentre of the ongoing protests. Mr Malik is particularly upset that the Centre and the Prime Minister did not pay heed to his proposal that Mr Modi should personally reach out to the angry farmers to find a solution to their prolonged agitation. Mr Modi apparently dismissed Mr Malik’s remark that convening such a meeting would enhance the Prime Minister’s stature.

Congress president Sonia Gandhi’s recent meeting with party office bearers and state unit presidents witnessed a long discussion on the proposed membership drive where party general secretary Priyanka Gandhi Vadra adopted a different approach from that of the other participants. Party leaders like K.C. Venugopal or P.L. Punia drew attention to the BJP’s massive membership drive and how the rival party’s efforts had been rewarded. There was also some mention that the Congress should emulate the BJP and fix a target of the number of new members the party should enrol. However, Priyanka Gandhi Vadra differed from her colleagues. She argued that instead of fixing ambitious targets, the party should focus on enrolling genuine members even if the numbers are small. Everyone knows the Congress machinery is notorious for drawing up lists of fake members who do not exist.

The Delhi unit of the Bharatiya Janata Party is extremely upset with finance minister Nirmala Sitharaman. In fact, it is so agitated that it is even planning to complain about her to the Rashtriya Swayamsevak Sangh. This comes in the backdrop of a recent meeting of a section of Delhi leaders with the finance minister where they presented her with a long list of complaints regarding income tax, GST, fuel prices and growing unemployment. The BJP leaders were looking for reassurances from the minister but instead she is learned to have made light of their grievances. The local leaders said they were hurt as they did not expect Ms Sitharaman to speak so dismissively with her own party members who have genuine concerns as they have to answer to the people.

The Bharatiya Janata Party’s Uttarakhand unit faces a serious dilemma. There’s a buzz in the hill state that chief minister Pushkar Singh Dhami is planning to contest next year’s Assembly election from two constituencies. The two-time MLA represents the Khatima Assembly seat. But it appears he is not confident about a victory this time as he had won the last election with a narrow margin. Then there are a number of unhappy senior leaders who were overlooked for the chief minister’s post in favour of a younger Dhami who, it is feared, could damage him in the election. In addition, Mr Dhami has a strong rival in the party who could also sabotage his election. Mr Dhami is, therefore, eyeing the Didihat Assembly constituency as his second seat which, he believes, could be a safer bet since he belongs to that area. However, the party leadership is not sure if this is a good idea as it would send out the message that the chief minister is contesting from two seats as he is not sure of winning from his old constituency. It’s a tough call for the party as it would be far worse if the chief minister was to lose his seat.

As expected, former Punjab chief minister Amarinder Singh formally announced that he will soon be launching his new party. This move has led to speculation about his wife, Preneet Kaur, and whether she will also follow her husband and join him in his new venture. Preneet Kaur is a Lok Sabha member, representing the Patiala constituency. She has, so far, been extremely supportive of her husband, and was always beside him when he was slugging it out with his bete noire Navjot Singh Sidhu and also when he was forced to step down as chief minister. It’s a different story now that Amarinder Singh is parting ways with the Congress. If Preneet Kaur decides to quit the Congress, she would have to give up her Lok Sabha seat. She is learned to have told some colleagues that she has personally no complaints with the Congress.