Omicron is the fifth such VOC, and the first since the Delta (B.1.617) variant which ravaged so many countries 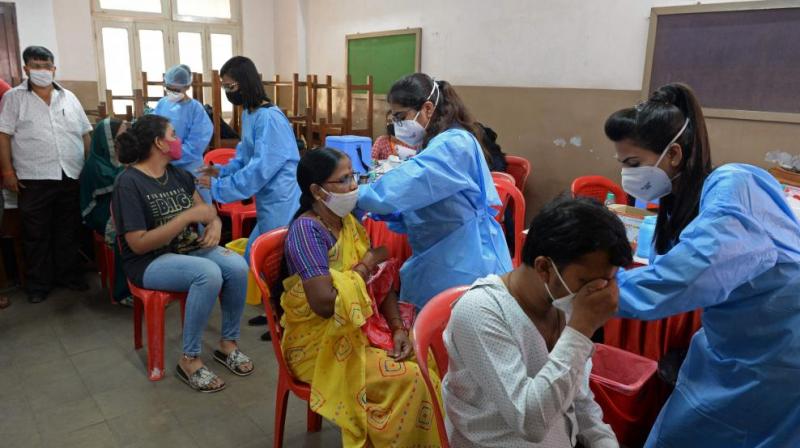 From a public health perspective, it is crystal clear that inoculating people in the developing world must be a top priority. (Representational Image. AFP)

Nearly two years into the Covid-19 pandemic, there is Omicron (B.1.1.529), a new variant of concern (VOC), according to the World Health Organisation, which uses Greek letters to label important variants of the virus that causes Covid-19. Omicron is the fifth such VOC, and the first since the Delta (B.1.617) variant which ravaged so many countries. It was first detected in early November by South African scientists from samples in that country and also identified in Botswana around the same time. It is now present in over 20 countries across the world. At the time of writing, India has not reported any case of the new variant but a slew of measures, including restrictions for international travellers, are now in place.

It is too early to draw definitive conclusions about the new variant’s capabilities. But one thing is clear — it has put the world on edge. Again.

The lessons it offers, however, are not new. Nor surprising.

Omicron was waiting to happen. Here is why.

We know that inequalities fuel pandemics, and pandemics fuel inequalities, that no one is safe from the virus till everyone is safe, and that global solidarity is critical at this moment.

And yet, in face of a pandemic that shows no signs of disappearing, there are few signs of solidarity between rich and poor countries.

Quite the opposite, in fact.

Over 30 countries have imposed restrictions on travel from southern African countries in the wake of concerns over the new variant though it is by no means certain where Omicron actually originated. It is now present in many high-income countries. It is also known now that the Omicron Covid variant was already spreading in western Europe before South African scientists identified and flagged it to the world.

African scientists are livid. Understandably. They say South Africa, which did an excellent job of detecting the new variant and sharing it with the world, is being punished.

Dr Ayoade Alakija, chair of the African Union’s Africa Vaccine Delivery Alliance, publicly attacked the travel bans on southern African nations as a singling out of Africa. “This is discriminatory and xenophobia and it is wrong,” she told the BBC.
Trevor Noah, host of “The Daily Show”, an American satirical news programme, and a South African, was equally scathing. “You do realise that other countries are paying attention, and they realise that if they’re going to get punished for telling the world about new variants, they’re gonna stop telling the world whenever their scientists discover new variants.”

From a public health perspective, it is crystal clear that inoculating people in the developing world must be a top priority.

In 2020, India and South Africa, with the support of more than 60 other developing countries, proposed temporarily waiving vaccine patents and other intellectual property rights so that developing countries can make their own vaccines and expand supplies. The “TRIPS waiver”, as it is known, is critical to ensuring an equitable distribution of vaccines.

This hasn’t happened. Pharma giants and many wealthy countries oppose the proposal, arguing that it could discourage pharmaceutical investment.

The stark reality, however, is that expanding global vaccine coverage is vital on moral grounds as well as in the enlightened self-interest of rich countries. Millions of unvaccinated people in a hyper-connected world make new variants likely and perhaps inevitable. Pushing up supplies will help prevent problematic new variants from popping up.

As of now, vaccines are simply not readily available in large parts of the developing world; only a fraction of the population in poor countries has been inoculated. For example, Nigeria and Ethiopia, two of Africa’s most populous nations, have vaccinated barely four per cent of their people.

India’s health experts are speaking out.

“First, chasing the variants and updating the vaccines cannot be the mainstay of the response in fighting Covid-19. We are in this problem mainly due to the colossal failure of the world in expanding the vaccination coverage to poor nations. This needs to change. Second, strengthening both epidemiological and genomic surveillance and sustaining it is essential component for timely action against not just this variant, but in tackling any future disease outbreaks,” says Dr Giridhara Babu, head, life course epidemiology, Public Health Foundation of India.

“The world needs to agree on some common standard operating procedures for tackling newer variants. Knee-jerk reactions (in response to variants) like banning the very countries that have better surveillance defeats the purpose. It is time to develop long-term control strategies for Covid-19,” he added.

What should India do?

Dr Babu says expanding coverage to the unreached and completing two doses for most of the population should be the first priority. “Once accomplished, it will help India take centre-stage in alleviating vaccine injustice all over the world.

Two, the surveillance systems should be strengthened; areas with missing circulation will lead to devastating consequences. Stronger review and monitoring should be done so that health systems recognise and improve areas that are silent or have poor reporting in detecting circulation. Three, a great deal of research should complement other efforts. These include assessing the effectiveness of the combination of vaccines, the duration of protection in everyone and vaccine efficacy in children.”

Health experts I spoke to say it makes no sense to ban travel from just southern Africa. And India should not join countries singling out African nations for travel bans.

“We don’t know if Omicron has already entered the country, because we were not testing for it. Given the experience of other counties, (like) UK or Israel, it is likely that there may already have been some who came to India who were already infected. It is virtually impossible for a disease like this to be held at bay by travel bans, unless they are so absolute as to not have anyone enter the country at all.

Given the often-complicated routes by which people might reach India, through third countries which have not reported cases, or even catching it from some chance exposure en route, one might temporarily delay the inevitable but not for too long. This is the standard epidemiological understanding,” says Gautam Menon, professor of physics and biology at Ashoka University.

The virus is not done with us; it replicates quicker in unvaccinated people, increasing the chance of mutations. The lack of vaccine equity is the prime reason why we are seeing, and will continue to see, new variants with immune escape potential, as Prof. Menon puts it. The message is clear.