Whatever the view, the fact is that India’s youth, particularly the student population, is restive and in the mood for rebellion. 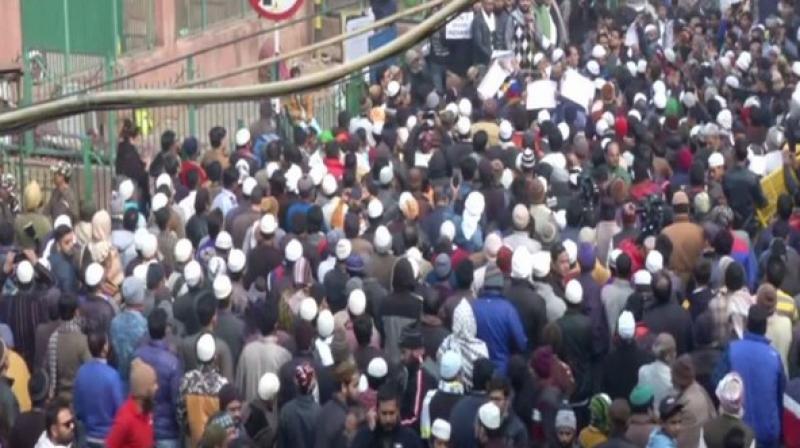 Adding to their discontent is the feeling that they have been brutalised by the police and bludgeoned into submission. (Photo: ANI)

The pictures of students fighting pitched battles with the police, leading protest marches in university campuses as well as city centres across the country and lighting candles to register their discontent has dismayed people nationwide.

Some view the students as rampaging “anti-nationals”, the so-called “misguided youth” who need to be reprogrammed to fit in with basic societal norms; others see them as the vanguard of a movement that will restore justice and put an end to divisive policies.

Whatever the view, the fact is that India’s youth, particularly the student population, is restive and in the mood for rebellion. Something has happened; some incipient gene of disaffection has kicked in, impelling unconnected students in different parts of the country to rise in protest against the introduction of laws that require Indians to prove their citizenship and effectively discriminate against Muslims from neighbouring countries seeking Indian citizenship.

The perception, right or wrong, is that the country is being divided along egregious communal lines and that surreptitious plans have been drawn up for the building of detention camps, like the infamous concentration camps of Nazi Germany, have horrified large sections of the country’s young people.

The country’s leadership and the government have stressed that there are no detention camps being envisaged for such people and denied any intention to discriminate against Muslims. Yet, the student community remains in ferment.

Adding to their discontent is the feeling that they have been brutalised by the police and bludgeoned into submission. This perception of being oppressed continues to feed the simmering unrest.

The issue is not whether the students are right or wrong, or have conducted themselves in the proper way. Their protest itself is the message. In societies worldwide, the young are the conscience keepers. They are natural iconoclasts and by nature anti-establishment. When they go on a rampage, the old men who lead society must pay heed. For something indeed is very wrong.

History has shown time and again that the discontent of young people can neither be ignored nor supressed in the long run. History is full of political movements led by students, or initiated by them.

Among the more memorable of these are the student movements in the United States in the 1960s, the first against the segregation of blacks and whites in public places and the second equally dramatic one in protest against the Vietnam War.

Racial discrimination in the United States was rampant for a long time and had continued in public life in many parts of the country. That was destined to change when four black students in North Carolina endured threats and abuse but refused to leave the lunch counter at a departmental store used by white Americans. Their symbolic protest spread rapidly as more students joined them and such sit-ins spread to other American cities. This civil rights movement eventually led to landmark law in 1964 outlawing racial segregation in all public places.

Young America rose again in 1966 in protest against the Vietnam War and military conscription. Student rallies in college campuses across the United States led to a brutal crackdown and in one instance, four students were shot dead. The students, however, would not be cowed down and continued with their anti-war protests and when President Richard Nixon finally decided to end the war in the early 1970s, he cited the student protests as one of the main reasons for doing so.

The 1960s saw student movements in many parts of the world, including France, Mexico, Germany, Spain as well as India. A worldwide bug appears to have bitten the student community in that period, which ultimately witnessed a transition into a more democratic world order.

During the current decade, students in a string of Arab countries prompted by political corruption, lack of democratic rights and economic problems led regime-changing revolts called the Arab Spring. A string of countries including Egypt, Libya, Yemen, Syria and Bahrain were affected by this youth upsurge.

Not all student movements, however, have succeeded and some have ended in tragedy, such as the urban Naxalite movement in West Bengal in the 1960s, which led to the killing of hundreds of students. In China in 1989, the Tiananmen Square students’ uprising saw battle tanks and armed troops brutally crushing the protesting students.

Yet, as the sage Swami Vivekananda had famously observed: “A brave, frank, clean-hearted, courageous and aspiring youth is the only foundation on which the future nation can be built.”

Neither age nor worldly ambition has yet corrupted students in different parts of this country, who are registering their protest today. Their voice must be heard, especially because India is now one of the youngest countries in the world with more than 65 per cent of the population below the age of 35 years. The median age in India is just about 28 years, compared to 38 years in the United States, 42 in China and 48 in Japan.

Although the protests are reported to have taken place in only about 22 colleges and universities in the country, the fact is that even this scale of student protest and commonality of aim has not been witnessed in this country in decades.

Suggestions that these student protests are orchestrated either by partisan or communal interests are unfair and inaccurate. The youngsters taking to the streets in New Delhi, Kolkata, Chennai, Mumbai, Bengaluru, Hyderabad and other cities should not be seen as a part of some despicable conspiracy against the ruling establishment but as a wake-up call. Theirs is the India that will be.

Youth is neither infallible, nor always right. The poet T.S. Eliot once wrote: “Youth is cruel and smiles at situations it cannot see.” Yet, the rebellion of young people is always in response to some perceived injustice or wrong. It is now up to the nation’s leaders to allay those apprehensions and ensure that society’s course never strays from the path of justice and probity.