There is the feeling that the economy is at the end of the Covid-19 tunnel, and the post-pandemic turnaround is around the corner 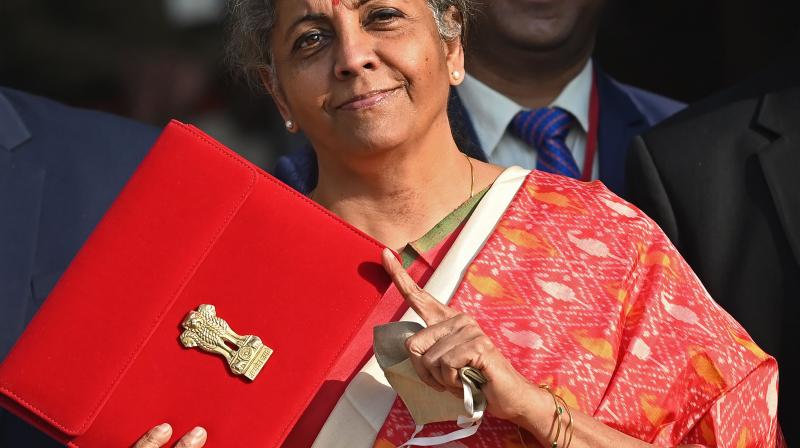 Ms Sitharaman has announced a huge capital expenditure outlay across sectors from health to infrastructure, and even to the financial sector, by setting up a Developmental Financial Institution with a capitalisation of Rs 20,000 crores. ((Sajjad HUSSAIN / AFP)

It was a sober budget for sombre times. Finance minister Nirmala Sitharaman delivered her third Union Budget without rhetorical flourishes. It was not the “once in hundred years” Budget the finance minister had promised. There is nothing bold or imaginative. It is the usual State-led Budget. But her quotation from Rabindranath Tagore, “Faith is the bird that feels the light and sings when the dawn is still dark”, reflects the mood of the government. There is the feeling that the economy is at the end of the Covid-19 tunnel, and the post-pandemic turnaround is around the corner.

Ms Sitharaman has announced a huge capital expenditure outlay across sectors from health to infrastructure, and even to the financial sector, by setting up a Developmental Financial Institution with a capitalisation of Rs 20,000 crores. She wants the DFI to develop a lending portfolio of Rs 5 lakh crores. The political message is quite clear: that the State is back in the economic saddle. The Economic Survey 2020-21, placed in Parliament on January 29, had strongly recommended that in a time of crisis caused by the Covid-19 pandemic, the State should step in. The Budget has followed the advice proferred in the Survey.

But the catch lies in this. Most of the capital expenditure is directed toward projects that have a long gestation period, whether it is increasing health centres or setting up biological safety level laboratories or the national institutes of virology. It will take more than a few years for these to become functional in a meaningful sense. At the most, it would create enough jobs in the construction sector as well as through recruitment for the facilities to be set up.

The Rs. 5.54 lakh crore capital expenditure outlay for 2021-22, a 34.5 per cent increase over the Rs. 4.12 lakh crore Budget estimate of 2020-21, may look sharp, but given the economic challenge, this incremental change is indeed quite modest.

The fiscal stimulus that the industrialists and analysts were looking for was that of an immediate one through direct and indirect handouts that would help in jigging the economy. But the finance minister has refused to go the populist way, something that the Narendra Modi government has resisted through its grandstanding of the Atma Nirbhar Bharat packages through the different stages of the lockdown. The stimulus remains an indirect one. The government is willing to create financial institutions like DFI to funnel financial flows. The government itself will stick to building biological safety laboratories and virology centres.

The finance minister, who is a firm believer in economic reforms and a liberalised economy, found her hands tied, but she has held out the hope that privatisation will continue. She has announced that the government has approved the strategic disinvestment policy, though the details have not been spelt out. She seems to believe that the sale of Air India, Bharat Petroleum Corporation Ltd et al would be completed this year, and she has set the disinvestment target of Rs.1.75 lakh crores, which may be difficult to realise.

The government has tackled the troublesome issue of the non-performing assets (NPAs) of the public sector banks by announcing the setting up of the Asset Reconstruction Company and Asset Management Company, which will serve as a “bad bank”, as suggested in some quarters.

The only populist gesture with a political intent is her allocation of funds for economic corridors as part of augmenting road infrastructure in election-bound states like Tamil Nadu (Rs 1.03 lakh crores investment for 3,500 km), West Bengal (Rs 25,000 crores for 675 km), Assam (Rs 34,000 crores for 1,300 km, apart from the Rs 19,000 crores earlier allocated). But she cannot be faulted for these allocations because she was indeed looking at the bigger infrastructure push. The outlay for the ministry of road transport and highways is Rs 1,18,101 lakh crores, of which, the minister said, Rs 1,08,230 lakh crores was for capital expenditure.

The government does not seem to be too afraid of the 9.5 fiscal deficit for 2021, and it is hopeful that the deficit will be gradually reduced to 4.5 per cent by 2025-26. This looks like a realistic pathway. This would be feasible if the economy recovers its growth rate and tax and other revenues improve in the next couple of years.

The vague hope entertained by the Narendra Modi government, especially by Prime Minister Modi himself, that India will become a prime player in the world economy in the post-Covid-19 situation may not work out though it is no fault of the Prime Minister’s optimism. India is not yet an economic engine of growth globally as China is, and there are many things to be sorted out in the domestic market. The major issue is that of reviving competition. And that seems to be a steep climb back. There are only a few big players in the private sector, and while the government may deny all the charges of encouraging “crony capitalism”, the main issue is that economic vibrancy will not be restored without real competition. The “Start Up India” programme was supposed to create competition, but the success of “Start Up India” has been lukewarm.

The suspicion lingers that the government is only too keen to be helming the economy and that the private sector is equally content to play second fiddle to the government. The dreams of a free market economy have now receded that much because of Covid-19. The government can justifiably retort that it has been forced to be in the driver’s seat and that it will have to do the job. Mr Modi will be only too happy to set targets for every sector in the economy!